Funkipedia Mods Wiki
Register
Don't have an account?
Sign In
Advertisement
in: Characters, IRL characters, Among Us,
and 4 more

Please don't add any information related to the Dream SMP.

Among Dream is an entity resembling both an Among Us crewmate and Dream (the Minecraft YouTuber).

They were modded in as a Pico reskin by MegaSonicFan112, who claims that Tokaint created the character.

Among Dream is an Among Us crewmate with a lime-green body and dislocated hands. Instead of a visor, they have a white circle with black dot eyes and a smile. While the visor replacement initially appears to be a replica of Dream's mask, Among Dream's poses show the mouth moving and the occasional appearance of simple eyebrows, implying that the circle is actually their face. 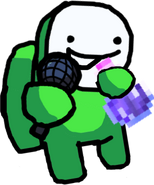 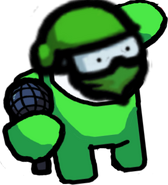 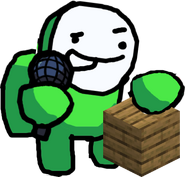