Annie is a mostly self-contained girl. Starring her own Full-Week, watch as she rap battles BF because, well, why wouldn't you? She also carries in her right hand an unknown carbonated liquid with powerful properties, known as T H E L I Q U I D.

Annie has pale skin, long black hair and red eyes covered by her hair. She wears a black v-neck t-shirt, red long legged pants, black shoes with white soles and long red fingerless gloves. She wears a black beanie with cat-like ears, and she carries a bottle with sliver ends on both sides, a cyan middle, a light blue inside holding T H E L I Q U I D, and a cyan cap. After drinking T H E L I Q U I D, she becomes much larger, her fingers become claws, and her skin becomes a light blue with bubbles floating inside.

In her older design, before Hazy River, she is now shorter and slimmer. Her hair is covering her left eye, while in Week 5 it covers both of her eyes. Her cat-eared beanie takes on the appearance of demon horns in Week 5. She carries The Liquid in a water bottle, while in week 5, the bottle cap is gone, and Annie is holding it in a drunk manner.

Note: All of these cameos are not canon to Annie's story. 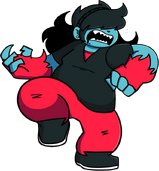 TAKE A SWIG OF THIS! sprites. 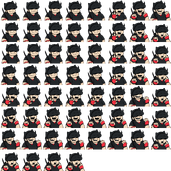 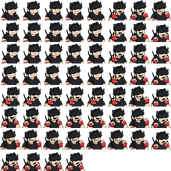 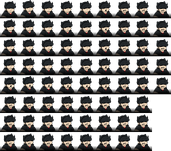 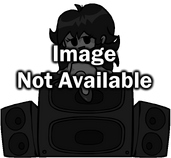 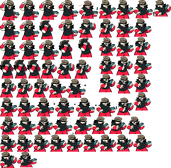 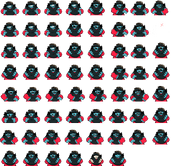 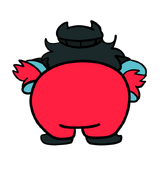 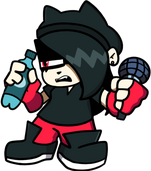 Annie in the story mode menu

Spike tree in the background of "Animal"

Annie as she appears in the YouTube soundtrack videos (similar design to gamebanana banner.) 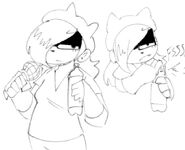 Artwork of Annie by atsuover

A different version of Minus Annie. (Design by @franbobisdrawing on insta, art by atsuover)[1] 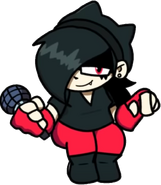 Annie as she appears in the Making the Friday Night Funkin' Annie Mod thumbnail. 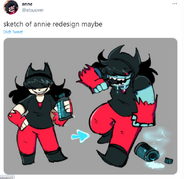 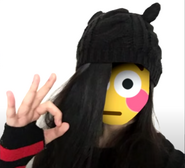 The outfit that inspired Annie worn by atsuover herself. 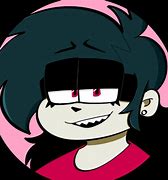 Old Artwork made for the Wiki