You know, the language you speak is quite outdated. You're probably one of the only people in the world who speak it. - B3 Daddy Dearest

Beegie is an original character by Nate Anim8, he has his own mod which replaces Boyfriend. But now, he has a full week released with 3 new songs and a remixed song on the Freeplay menu.

Beegie is a small purple bunny with cyan spots. He uses his ears as arms. He stands on a brown box with an arrow on it that points corresponding to his current note pose.

In his full week mod, his colors are much clearer and less pale, and his feet are darker in color. He wears a pair of red shades, and he stands on a red boombox whose appearance resembles the boombox that Girlfriend is holding in the Vs. Whitty mod.

In Popsicle Sticks, he's now held by Nate and he no longer wears his pair of red shades. 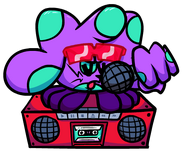 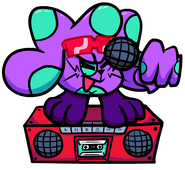 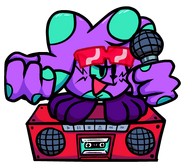 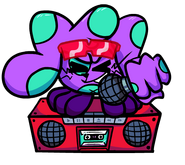 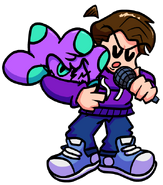 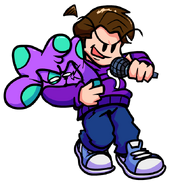 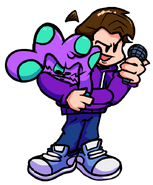 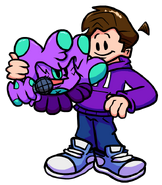 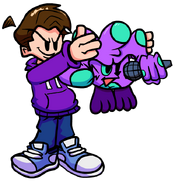 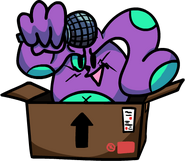 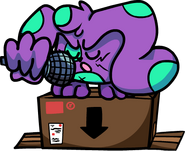 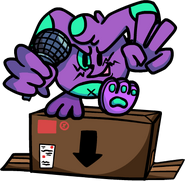 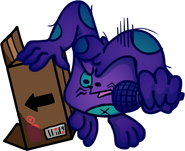 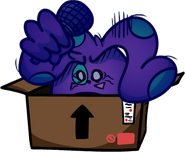 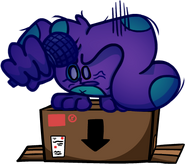 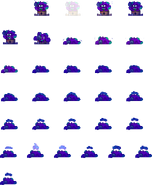 Beegie on the title screen (Static)

Boyfriend in the menu

Nate in the menu

Daddy Dearest in the menu

Girlfriend in the menu

"Discord Mod" in the menu

Swipe that goes under the options

Ditto, but with no color

GF on the couch (Static) 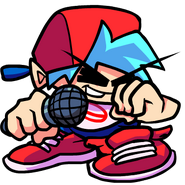 Nate on the couch (Static)

Nate and Randy on the couch (Static)

Characters in the background (Static) 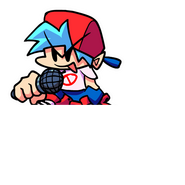 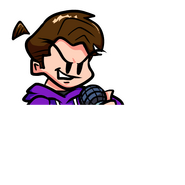 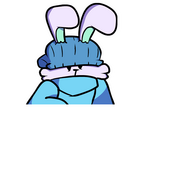 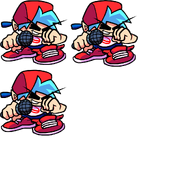 'Nate': We can chill here for the time being while we wait.

Narrator: Nate sits on the couch

'Nate': We can play games, watch some videos, anything really.

'Nate': You want me to sing with you?

'Nate': ...and especially not against them.

Narrator: Beegie walks up to Boyfriend and Nate, holding a newspaper with Boyfriend's name on it

'Nate': ...I think you got a challenger, Boyfriend!

'Nate': Though... I don't think you have the look of a singer, Beegie.

Narrator: Nate tosses a pair of sunglasses and a boombox to Beegie

'Nate': Alright! Knock 'em out, Beegie! I'll be cheering for ya!

Narrator: Girlfriend kicks the door in before using magic powers to throw Nate's dog to the side

Girlfriend: Finally found the place. Your dogs are wild, Nate.

Girlfriend: Well, are you all ready to go to the skate park?

'Nate': Hmmm, not yet. You two have had enough fun, show me what you got, Boyfriend!

Narrator: Nate jumps up from the couch, teleporting behind Beegie to grab him and his microphone

Narrator: Beegie has an angry expression as Nate puts him down on the couch

'Nate': Hey, that was really fun! Thanks for singing with me and Beegie.

'Nate': -haven't seen him smile since the day I adopted him.

Girlfriend: Well, are we ready now?

'Nate': Pico's probably pissed that had to wait this long...

'Nate': You are pretty good at singing Boyfriend.

'Nate': This one is a remix of a song that I hold close to me. Try to keep up, alright?

'Nate': Randy the rabbit, what the hell are YOU doing in my room?

'Nate': Also, where did all of these other people come from?

'Randy': I came to hang with you and the rabbit. Hope you don't mind if I brought a few friends.

'Randy': But what is this blue haired brat doing here?

'Nate': Hey, be nice! He's just chilling with me and Beegie.

'Randy': Well if y'all are singing, try this tune. It's one of my old favorites. I had my pal bb remix it. Cool dude.

'Nate': Alright, do it Beegie!