Reason: Benson and Regular Show is owned by Cartoon Network.

Note: This is not the official Benson mod and was made to show what it would be like to play it.

I CAN’T GO ON, I WON’T ACHIEVE ANYTHING!! S-SOMEONE PLEASE END MY SUFFERING! - ENA

Do you want to learn more about Benson?

“GET TO WORK OR YOUR FIRED!”
― Benson, Yelling at Mordecai and Rigby

Benson Dunwoody is a gumball machine and the park manager. Whenever he gets angry, his gumballs turn red, mostly from Mordecai and Rigby slacking off. The mod is composed by Visummum , and has art created by Mashprotato.

Benson Dunwoody is a gumball machine with pinkish-purple/red gumballs enclosed by a glass dome, sunken eyes and a large, straight nose that just about overlaps his mouth. The gumballs may act as facial hair for Benson, as noted by story boarder Benton Connor. It is also worth noting that the dispenser slot sits in a rather phallic position. The turn switch on his chest is shaped like a heart symbol, hinting that's probably where his heart is. When his latch is open it is considered to him being naked, as well as his private area.

Benson was born somewhere in the late 60s or early 70s. During his childhood, his family often argue and abuse each other, even at dinner, which may be the reason for his short temper. As shown in "Think Positive", his father taught him about yelling, in their philosophy that they won't get anything in their lives unless they yell.

Since "Weekend at Benson's", he was in a relationship with Audrey. However, their relationship ended, causing him to be depressed for months.

Benson is shown ripping his hair out during a flashback after losing on a game show. Also, in "Terror Tales of the Park IV" (Unfinished Business), in Benson's flashback in which he was conversing with Mr. Maellard, he had the same hairstyle as he did in "Expert or Liar" (before it fell out), implying that this event took place before the game show and was perhaps even his first day at the park.

Benson is easily the most short-tempered character of all. His short temper is usually contributed by the lack of productivity by Mordecai and Rigby, as they always prefer to slack off and play video games rather than doing their jobs. Benson often threatens to fire Mordecai and Rigby if they don't finish their work or do a simple task such as buying tortillas or going to a Karaoke Bar. Whenever they destroy park property or slack off, Benson loses his temper, turning varying shades of red, and often flips out on Mordecai and Rigby. Aside from this Benson is usually calm and, in fact, is friendly and social, even with Mordecai and Rigby. Whenever Benson is in a good mood, he'll reward his employees with time off, usually in the form of nightly entertainment or dining out. 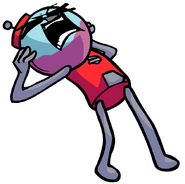 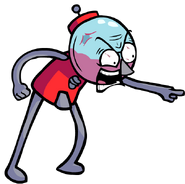 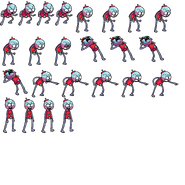