Reason: Animated poses are not in the gallery yet

Big Sister, or Khole, is a character created by HOTMINUTE studios. As her name implies, she's Boyfriend's Big sister.

Khole is a tall female which has long cyan hair, very similar to Hatsune Miku. She wears a hat identical to, Boyfriend. She wears some sort of blue belt which based from all her animations besides the up animation, it looks like the belt is a bit too big (this could also just be a shirt with the sleeves tied up to the waist.) She wears red shorts accompanied by long socks. She wears red flat shoes with black laces, the laces make an infinity sign. She wears a white shirt which has blue sleeves.

(Big Sister is walking down the street and humming to herself)

Boyfriend: (Waves to Big Sister, only to suddenly become shocked)

Big Sister: OH MY GOD, IT'S YOUUUUUUUUU! (Pulls Boyfriend in for a hug)

Boyfriend: (Screams, as he cannot breathe from the intensity of the hug)

Big Sister: I missed you SO MUCH, little bro! How have you been? I haven't seen you in so long!

Big Sister: Sorry, I didn't mean to make you pass out. Woops! Any way I can make it up to you?

Big Sister: That was a lot of fun little bro! You have gotten much better at this!

Big Sister: Last time I heard you sing was in your High School talent show! It was-

Big Sister: How about we go for another round?

Big Sister: I don't know when I'll see you again after this.

Big Sister: You are always so busy...

Big Sister in the menu screen 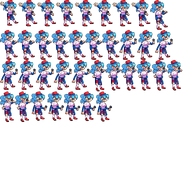