Reason: Cartoon Cat is supposed to be a Cartoon-ish Cat that is a Creepypasta Character made by Trevor Henderson. Also, just look at him! Or don’t, actually. That’s a better idea.

“You can tip toe, run all you want. I'm on the prowl, and I'm just being blunt. But you're lookin' delicious, you're lookin' nutritious, You're probably going to sleep with the fishes!”
― Cartoon Cat, Toon Catastrophes

Cartoon Cat is a large humanoid cat that, as his name suggests, resembles a 1930's era cartoon. He wears white striped gloves, has a very wide grin and cartoon-style eyes. His entire body is black, and he also possesses feet that end in points (in both mods). JesusA6776's Cartoon Cat has a body very similar to the Monster's, as his sprite is a reskin of the Monster. 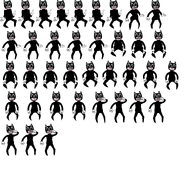 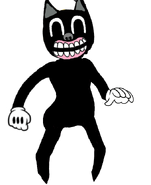