White and a bit of purplish blue

Cye is a space cat that observed the planet Earth for music. They watched rap battles after rap battles, music compositions after music compositions. In their free time, Cye would practice rapping to themself. Cye always wanted to display their rapping abilities. After a few months, they chose the perfect candidate to battle, Boyfriend. After observing Boyfriend's constant victories against everyone, including Daddy Dearest, they knew Boyfriend would make for a great opponent.

Their demo mod comes with 5 songs, and 4 remixes of their main songs, resulting into 9 songs. Their main songs are Moon High, Far Heaven, Space Duel, and Galaxy.

Cye is a small cat with white fur that has a light blue shade. They wear a long periwinkle coat with cornflower blue and white colored fur near the ends of it.

Note: All of these cameos are not canon to Cye's story:

Song audio will not be added as the creator does not want them on other websites. You can listen to them here. 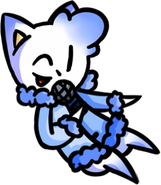 The background during Cye's Week 1

The background during Galaxy

The background during Cye's Week 2

The background during Galaxy X 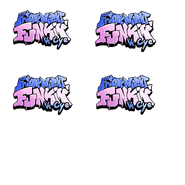 The old VS Cye logo

The new VS Cye logo 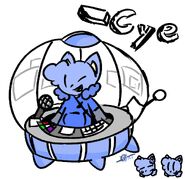 Minus Cye, drawn by UniBrine. 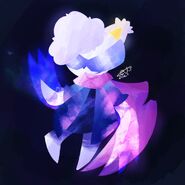