I quite liked it. - Gorg.EXE

“Anyways, I like you. You're like me, just trying to make it in this world through music.”
― Cyrix, Assembly

Cyrix appears as a humanoid-like robot, with a CRT monitor for a head with lime green facial features (mouth, eyes, etc.).

He wears a grey hoodie over a slightly lighter grey shirt with an angry face on it, more specifically the Newgrounds Angry Faic. He also sports dark grey jeans and black and white shoes. His metallic "skin" is light grey with the exception of his palms which are almost black, making them resemble fingerless gloves. He wields his microphone in his left hand. During Integer Overflow, he gains lime green sweat drops on his face and he becomes nervous.

Upon crashing in System Crash, his face flashes between static, a TV color test screen, and several OS error screens. His poses are more frantic and erratic, and he no longer wields a microphone.

Cyrix can be summarized as generally laid back and relaxed, but also not afraid of a little friendly competition. Being a producer (and head of a record label), he ultimately believes in the power of music to connect and unite people. Although amiable overall, one sore spot Cyrix prefers not to talk about is his past (See Trivia for more details).

Note: Not all of these cameos are not canon to Cyrix's story:

Cyrix: Thanks for stopping in, man! You and your girlfriend are becoming quite the stars with what you've been doing.

Cyrix: It all started with her dad, huh? That rockstar? And then...

Cyrix: I mean, between that scarecrow dude, that skull guy, and that dragon thing...

Cyrix: It'd be weird if you two weren't making a name for yourselves.

Cyrix: I don't even need to mention what happened in Nevada...

Cyrix: Anyways, I like you. You're like me, just trying to make it in this world through music.

Cyrix: That's right man. Let's get this going! Show me what you got!

Cyrix: That was pretty good!

Cyrix: Let's see if you can keep up!

Cyrix: You really are as good as they say...!

Cyrix: I forgot to mention it before, but I also heard about your run in with Hex!

Cyrix: He's something else, ain't he? We've been tight for a while now.

Cyrix: Suppose it's easy when you're the only Machines around...

Cyrix: But I ain't through with you yet...

Cyrix: NO MORE HOLDING BACK. HERE WE GO!

Cyrix on the title screen

The background seen in SYSTEM CRASH 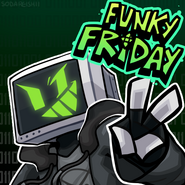