Reason: Vetar's unused Lustful form, we don’t need to tell about her form but her form is obviously suggestive; not to mention Kosten's original design and (one of) Wren's designs are also significantly suggestive. Also it's DOOM, a game that been rated M for Mature which it’s contain “Blood and Gore” and “Intense Violence.” 7869.wad also originates from the DOOM Lost Wad creepypasta, which contains extremely graphic content.

This mod is currently on hold. This may either mean that development is temporarily halted, or that the mod is temporarily unable to be downloaded to fix one or more issues that may be present, or the mod is on a long hiatus. More information can be found below.

Reason: The team is focusing on other projects.[1]

Friday Night Funkin': ARGENT ANNIHILATION is an upcoming mod made by Argent Dev Team, a modding group managed by SlayerOfGoroth and formerly Forsaykn. It features a brand new week loosely based in the continuity of DOOM Eternal. Multiple weeks have been confirmed by Slayer via the Argent Dev Team account. Set in (very clearly) alternate timelines of DOOM Eternal: The Ancient Gods Part Two, the mod features original characters for the mod, along with characters from the original source material.

Announced on July 28th, 2021, ARGENT ANNIHILATION briefly released as a one-song demo on February 27th, 2022, before Argent Dev Team removed it three days later, eventually rereleasing it after the release of an April Fool's demo on April 1st, 2022. The full mod, featuring all weeks and songs, is set to release sometime in the future.

Vetar Maykr is the first opponent of The Immoran Blood, and the main opponent of Demonic Duke-Out. She is the daughter of Davoth, the Fourth Dark Lord of Hell, and Lilith Maykr, a fallen archangel turned high-ranking succubus. Her songs are Hellish, Lustful, and Wrath.

During Hellish and Lustful, she wears a red shirt with a red and black jacket over it, patterned velvet sweats and orange sneakers. In the latter, her jacket is worn more outward and her shirt reveals a little more.

Kosten Maykr is an upcoming character. He is the son of Davoth, and thus, the brother of Vetar Maykr. He is confirmed to be appearing in the mod's full release. His songs are Hedonist and Exiled.

Wren Blazkowicz is the antagonist of Week 3. She is the daughter of B.J. Blazkowicz III, better known as the Doom Slayer, and the leader of the last surviving Night Sentinels. Her songs are Sentinel, Crucible, KAOTIC.

During Sentinel, her Praetor Suit closely resembles that of her father's, with some minor changes, such as the lack of a Doomblade or Equipment Launcher. 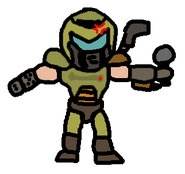 “You should not have shown that video to ANYONE. This is just a little warning”
― 7869.wad

7869.wad is an upcoming character based on the little-known DOOM Lost Wad creepypasta. He is a horribly mutilated version of the classic Doom Marine, an original design created due to the character lacking an existing design. His song is Fair Warning.

Upcoming characters are included here, as well as background characters: