Reason: Deimos hails from Madness Combat, a series known for its gore and violence. After Nerves, poor Deimos gets stabbed in the face by a chain. Due to this mod being a reskin of Garcello, Deimos has the same personality as him, and he fades away in a similar manner at the end.

Deimos Over Garcello is a skin mod created by MashProTato and PeabPot. It serves as a Madness-Combat themed reskin of Smoke 'Em Out Struggle that puts Deimos in Garcello's role.

Deimos, like most residents of Nevada, Has light grey skin, floating hands and a facial cross. The top of his head is wrapped in bandages, over which he wears a visor and headphones. He also wears a black jacket over a white shirt. The jacket has black belts on it that are fastened around his chest. His shoes are bluish-grey. He smokes a white-and-orange cigar. This serves as his appearance during "Headache".

During "Nerves", Deimos changes to his look in "Chase.fla", which is the same as his normal look, only now his face is now covered with grey blotches that represent blood from when he was killed in "Madness Combat 9: Aggregation".

After "Nerves", Deimos is stabbed in the face by a chain and dragged away. When he returns for "Release", he now has his look from "Sacrifice.fla", which is his normal look but covered in dark blotches of blood, and his lower jaw has been ripped out.

During "Fading", Deimos turns into his new rock form introduced in "DedmosRebuilt.fla." His hands, lower jaw, and chest are now made of rock, whilst sill retaining his general outfit, then he fades away. 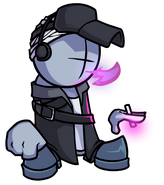 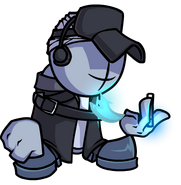 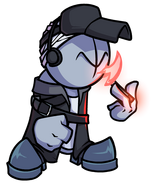 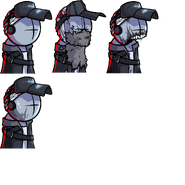 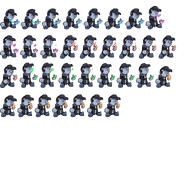