“Well met. No need for introductions, this will be over soon enough.”
― Detra, Retricus

Detra is a dream eater who appears in their own mod Detra's Mental Decimation, they are the antagonist of their week and their freeplay exclusive track. They attack Boyfriend in his dreams because they want to eat them, they then end up teaming with Boyfriend in the bonus week to fight off the second antagonist, Vagrant in their own week.

Their gray bald head has empty eye sockets with orange pupils, their nose resembles the nose hole in a skull, they wear a dark orange cloak with yellow stripes near the edges, underneath is a shirt with a sort of black ooze coming from under some bandages.

Detra and Bf's down animation

Detra and Bf's up animation

Detra and BF game over animation 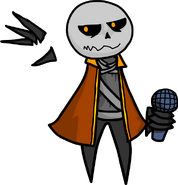 Detra on the mod banner

The background during Detra's week

The background during Extremus 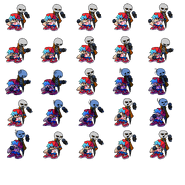 Detra and BF game over 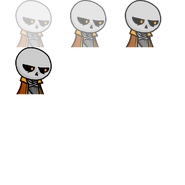 dr (In The Files)

“Once more, once more.”
― Vagrant, Compel

Vagrant is the second antagonist of the mod Detra's Mental Decimation, appearing in their second week to face off against Boyfriend and the Dream Eater Detra. They are said to be dangerous and capable of actually causing harm. They are drawn to music and is said to be more powerful than Detra. Their speech pattern is almost backwards.

Vagrant appears to be humanoid in appearance, but lacking arms and having floating hands, although only one hand is present at a time. Their round head is divided into two colors, being white and black. One eye is wide open, while the other is slanted in a serious manner. They are dressed in gray, donning a dark orange, almost red cloak similar to Detra's, but darker and torn up.

Vagrant on the mod banner

The background during Vagrant's week 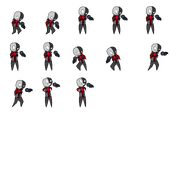 Detra: Well met. No need for introductions, this will be over soon enough.

Detra: Just know that I've taken the liberty of giving you a fighting chance.

Detra: Your preferred method of battle seems to be... music?

Detra: You're a tough one. Still, I need you out of here.

Detra: After all, I've got a couple dreams to eat, and I've already gone through all this effort.

Detra: Funny that you have another person so firmly rooted in yours, though.

Detra: Why must you make this so difficult?

Detra: What's a few dreams to you? It's not like you need them for anything.

Detra: I'm getting sick of this dance. Let's give it one more go.

Detra: If you keep this up again, I'll just find someone else to feed off of. Deal?

Detra: I'll take that as a yes.

Detra: I left you alone, what draws you to look for me again?

Detra: I'm starving. Go away, I'm hunting for someone to feed on, and you're last on my list.

Detra: Y'know what? Let's go one last round, if you're so inclined to face me.

Detra: Forgive my intrusion on your dreams again, but I am in dire need of help.

Detra: Ever since we had our "confrontation," I've been followed around by-

Detra: I'll explain more later, we need to work together. You've proven to be better at this than I, so I'll follow your lead.

Detra: This thing is much stronger than I am, and is compelled by music.

Detra: The threat it poses is beyond simply eating dreams, it'll rip your will straight from your mind.

Detra: I'm just a dream eater, I can't actually hurt you. This thing can potentially kill both of us.

Vagrant: Let's go again, another round. Fun we're having, challenge we're getting.

Detra: I think they're losing interest, but they still aren't going to go easy on us.

Detra: We need to hold out a bit longer, then I think we can both go our own ways.

Vagrant: Once more, once more.