Reason: This mod is based off multiple Creepypastas. As for the demo, the mod is focused towards Cupcakes, a very gorey Creepyasta.

(...keep calm Macy, Elements Of Insanity's only like, 2 feet tall they can't hurt you.) - Macy

Reason: Images, infoboxes and the songs.

Upcoming: More content will release for this mod eventually.

Reason: MLP is copyrighted. This is based off of many MLP creepypastas, as mentioned. Oh, & the song Discord is owned by Living Tombstone.

I'm not sure, but you look very strange. - Windows XP

Reason: New update came out, get to work and start adding info.

Special Thanks:
bbpanzu (Pinkie voicebank)
Hasbro (MLP:FIM)
Sergeant Sprinkles (Author of Cupcakes)
Mister Davey (Creator of Cupcakes HD)
Elements of Insanity is an FNF mod based around the many Creepypastas and parodies of My Little Pony: Friendship is Magic, such as SHED.MOV by hotdiggedydemon, Cupcakes by Sergeant Sprinkles, and other non creepypasta/parody My Little Pony media such as TheLivingTombStone's Discord remix.


Pinkie Pie is one of the main characters of My Little Pony: Friendship is Magic, and the main antagonist of the Cupcakes fanfic, as well as of this mod. In said fanfic, Pinkie Pie is depicted as a psychopath who tortures ponies and makes cupcakes from them, and now she intends to incorporate Girlfriend into her next recipe!

Pinkie Pie is a pink pony with a curly magenta mane and tail. On her flank, she has a cutie mark of three balloons side by side, being two blue balloons with yellow strings and a yellow one with a blue string in between. She wears a doctor's head mirror and wields a red chainsaw with a grey grip in her left hoof.

For a brief section of "Cupcakes", Pinkie Pie's mane and tail go straight and droop downwards. In the original show, this is how she used to look like before she got her cutie mark, and can end up in this state if extremely upset. She also becomes slightly desaturated. 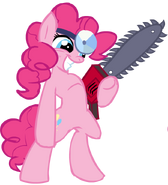 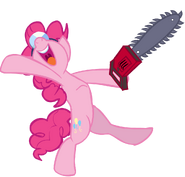 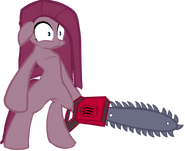 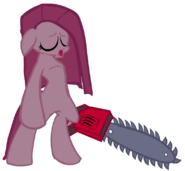 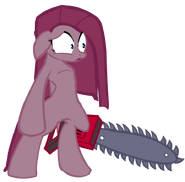 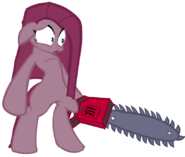 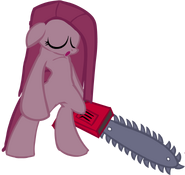 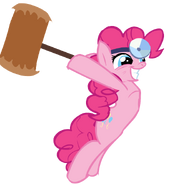 Pinkie using her mallet at the end of "Cupcakes", the same one she used to knock out Rainbow Dash in her source material.

Girlfriend (What do you think)

Friday Night Funkin'
Boyfriend is the protagonist of the mod. Like his counterpart from the original Friday Night Funkin, he's up to rap against anyone no matter how dangerous (mainly because he's too stupid to comprehend the danger of the situation), and now he's rapping against Pinkie for Girlfriend's life.

In this mod, Boyfriend is a pony instead of a human. He's colored light cyan with a darker shade of cyan for his mane and tail, and has blue eyes instead of beady black eyes like his original counterpart. He wears a red cap with a blue brim, and on his flank is a cutie mark of a microphone, befitting his profession as a rapper.

Girlfriend is Boyfriend's, well... girlfriend. She's been strapped to a table by Pinkie and is in danger of being turned into cupcakes, but much like her boyfriend, she fails to comprehend the danger of the situation and is in a constant state of bliss.

In this mod, Girlfriend is a pony instead of a demon. She's colored red with an auburn mane and red-orange eyes instead of beady black eyes liker her original counterpart. In "Cupcakes", she appears to lack a tail, as well as a cutie mark, but "Shed" reveals that she does have a tail, said tail being auburn like her mane, and her cutie mark is a speaker.

Bow Hothoof and Windy Whistles (parents)
Rainbow Dash is one of the main characters of My Little Pony: Friendship is Magic, and a victim of Pinkie Pie in Cupcakes. Here, she's observing the rap battle from the foreground, looking on in complete horror.

Rainbow Dash is a cyan pegasus with a rainbow-colored mane and tail and pink eyes.

“Hey, hey, hey! Stay out of my shed!”
― Fluttershy, regularly


Fluttershy, voiced by Max Gilardi, or HotDiggityDemon is a pegasus who is proved to be very timid and shy, but is really a psychopathic serial killer. As a sign of foreshadowing, her cutie mark consists of a bloody dagger. Though most people think that she's ugly and scary, she has made cute and kind compliments to people and that's mostly just to hide that she's a serial killer to anyone who enters her shed.

Fluttershy is a light yellow pegasus with a light pink mane and tail and teal eyes. In the original show, her cutie mark is three pink butterflies, but in the PONY.MOV series her cutie mark is a bloody dagger. 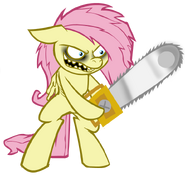 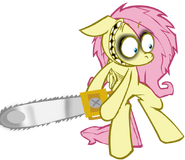 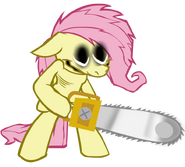 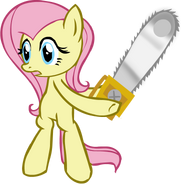