Note: This mod is a fan-made update to bbpanzu's original FL Chan mod.

Reason: This character is owned by Image-line Software.

FL Chan is the mascot for FL Studio, with her original mod being created by bbpanzu. The FL Chan 2022 update was created by FunnyCaptain.

FL Chan appears as a young light-skinned girl with short, light green hair with an ahoge on top and glowing black eyes. She wears a pair of orange headphones, an apricot, sleeveless suit with another light green part on the front held by screws and a white rectangle with a black upside down triangle symbol on her chest. She also wears a black skirt which resembles piano tiles, dark gray gloves, collar and boots with white trims and holds a microphone in her right hand.

Note: All of these cameos are not canon to FL Chan's story. 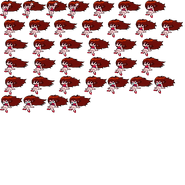 Her banner from GameBanana.