Reason: For a high-quality article, this page has 18k+ bytes of information.

FNF: Kepler Observation Unit is a mod developed by Glitchdroid.

Boyfriend and Girlfriend sneak into an observatory to try and find some privacy in an attempt to get away from Girlfriend's evil parents. There, they end up meeting Kou, who has a passion for the stars!

In the Friday Night Funkin' Universe, Kou meets Boyfriend and Girlfriend while he is visiting an observatory that he frequents. Despite Boyfriend and Girlfriend's search for privacy away from her evil parents, they engage in conversation with the android. Kou expresses the wonders of the universe through singing with Boyfriend, and after two songs, Girlfriend and Boyfriend eventually have to leave. Kou appears to be saddened by this, as he is used to spending most of his time in space by himself without anyone to talk to. It's implied that Boyfriend tells Kou that he'll come see him again, but whatever he said made the android happy once more.

In Week 2, Boyfriend and Girlfriend return to the observatory after several months to pay a visit to Kou. Kou explains that he had just returned from a space expedition and, as always, is eager to share information about it with Boyfriend and Girlfriend through song. After Twinkle, a new character known as GSU appears and tells Kou off for sharing information about the space expedition as it's meant to be kept confidential. It appears that Kou and GSU already know each other, but how they know each other is left unexplained. GSU arrests Kou for spreading classified information, putting him in handcuffs and leaving him in shock. In the cutscene after Lockdown, Kou breaks out of the cuffs by banging them on the speakers and tries to talk things out with GSU. GSU tells Kou off once again for having friends and also mentions that they don't share a friendship and are not supposed to have feelings due to being robots. Quasar begins with Kou now replacing Boyfriend and trying to change GSU's mind. GSU is impressed of what points are given and allows Kou to continue his friendship with Boyfriend and Girlfriend as well as himself.

“Ah- Guests! Welcome to the observatory! May I be of assistance?”
― Kou, Pre-Space Boy

Kepler Observation Unit, also known as just Kou and stylized as KOU is a character created by Glitchdroid.

Kou has dark blue hair with an ahoge on the top of his head, a yellow hairclip, bright pink eyes, and a gray full-body suit with white and dark-gray accents. He wears black and white thigh-high boots with a teal trim and silver soles. His long, black gloves have two white stripes at the top. Kou also wears a pink bow tied around his neck. He carries a mic with teal lining at the top in his right hand, while his left is spread out. On his face, he has either buttons or sensors[3] under his eyes that resemble freckles. 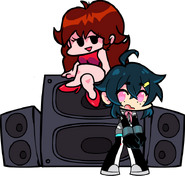 Ditto, But Without Girlfriend

Ditto, But At The First Frame

Ditto, But At The End Of The Frame 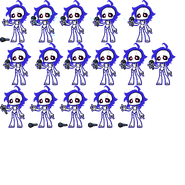 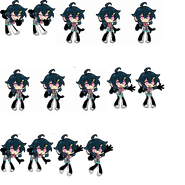 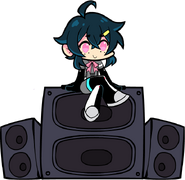 Kou in the Title Screen of the Mod

Kou in the Story Mode Menu

Kou in the Old Banner

“We are not supposed to feel anything. We are machines.”
― GSU, Pre-Quasar

Government Surveillance Unit who is also known as Government Security Unit or GSU and G-SU for short [7] is the second opponent of the mod.

GSU is a pale male android with silver hair and cyan eyes. He wears a white, sleeveless tight-suit, similar to KOU's, and long black gloves with dull, white spikes on the knuckles. He also wears black thigh-high boots with white and cyan accents and silver soles. GSU tends to adorn a rather emotionless or uninterested expression on his face, which is reflected by his attitude.

Note: None of these cameos are canon to Kou's story.

Kou
May I be of assistance?

Kou
Evil parents? I can't say I've detected any of those around here before.

Kou
Oh! I was just about to deliver this month's sky report.

Kou
Perhaps I could share some knowledge with you instead!

Kou
I agree! Our universe truly is incredible.

Kou
Most of the data I've gathered has been through space observation and exploration.

Kou
The Kepler Observation Unit to be exact!

Kou
But you can call me "KOU."

Kou
You have to leave now?

Kou
Will you come and see me again?

Kou
There is still so much I have not shared with you two!

Kou
I can't help but want to share everything I know about the universe, it's in my code.

Kou
My friends, you came back! It's been months since I've last seen you!

Kou
I've just returned from a space expedition, there is so much for me to tell you!

GSU
You are under arrest for revealing classified information to unauthorized personnel.

GSU
All space expeditions are to be kept confidential.

GSU
These two will also be brought in for questioning.

Kou
Put your hands where I can see them.

Kou
G-SU, I won't let you treat my friends like this!

GSU
We aren't supposed to have friends, KOU.

Kou
I... I thought we were friends.

Kou
You do not feel the same?

GSU
We are not supposed to feel anything.

GSU
We are machines.

GSU
Alright. You make a convincing argument. I will allow you all to go free for now.

GSU
However, KOU, you must refrain from distributing classified information so freely in the future.

Kou
Of course! I promise to be more cautious from now on.

GSU
And... If you really feel so strongly about this concept of friendship...

GSU
I suppose I could put aside time to consider it as well.

The cutscene that plays at the start of the Week

The cutscene before Twinkle

The cutscene before Lockdown

The cutscene before Quasar

The cutscene after Quasar

Boyfriend and Girlfriend during Quasar. 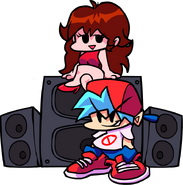 Ditto, but When the Player Misses a Note. 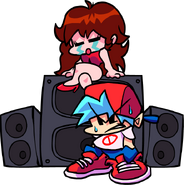 Main Menu of the Mod

The Background of Kou's Week