I have been stuck in Fangirl Frenzy for god knows how long, much longer than you can imagine, that one's for sure. - Austin

Reason: We mostly need images in the gallery

Friday Night Funkin': Fangirl Frenzy, or VS Lexi, is a mod made by Dra9on5. It follows the story of Lexi, a Boyfriend fangirl who wants to spend time with her months-long idol. It features 3 songs, plus 2 bonus Freeplay songs.

After a long day out, Boyfriend and Girlfriend get stopped on their walk home by Lexi, a not-so-subtle fangirl who is obsessed with Boyfriend and is ready to burst into song on the spot. Boyfriend is reluctant to play along but ultimately, he chooses to go through with it. Will Lexi fulfill her lifelong dream (though, it's a months-long dream) to sing with her idol? Will Boyfriend be able to get some rest for once? There's only one way to find out!

Were you looking for Lexi from Friendly Night Funkin'?

Lexi is a Boyfriend fangirl created by Nutquesadilla.

Her appearance is fairly similar to Boyfriend, and in some respects, the character of Sky. She's a young girl with short cyan hair, a bright red and blue cap very much like the one Boyfriend wears except it's slightly shorter, blue jeans that are torn at the knees, pink shoes and she's wearing a Boyfriend shirt. She also is just a tad taller than Boyfriend. 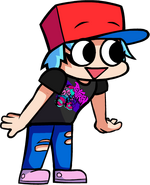 Lexi on the title screen.

Note: None of these cameos is canon to Lexi's story

Girlfriend: Tonight was absolutely AWESOME. Nobody even stood a chance against you!

Boyfriend: Those people were leagues below me, though. A TRUE opponent wouldn't have been so easy!

Girlfriend: Oh come on, don't act like you weren't nervously sweating in that last battle...

Boyfriend: Pffft, you're scared of LIGHTNING. Cut me some slack!

Girlfriend: Haha, you have a point.

Girlfriend: All that aside, though I'm absolutely pooped.

Girlfriend: Bobbing your head back and forth endlessly is a lot more tiring than you think.

Boyfriend: Luckily there shouldn't be anybody else to get in our way, it's a straight shot home from here!

Girlfriend: Yup, absolutely no more trouble from this point forward!

Girlfriend: Wait a minute, who's tha-

Lexi: BOYFRIEND! Is it really you?

Lexi: But now you do!

Lexi: It's an absolutely pleasure to meet you after all this time!

Boyfriend: Hold on, you can understand me?

Boyfriend: I was just thinking out loud. Figured all you'd hear is "Beep skiddily boop".

Lexi: Of course I can!

Lexi: You really think that I wouldn't know how to speak Boyfriend?

Boyfriend: I don't know... would you? I don't even know who you are.

Lexi: Just ask any member of the Unofficial Boyfriend Fanbase, and they'll tell you!

Girlfriend: "Biggest Fan?" I didn't know Boyfriend had fans. Or a fanpage.

Lexi: Of course he has fans! He beat you parents TWICE at their own game!

Lexi: That's enough to get ANYBODY talking.

Boyfriend: Really? I thought the Dearests were a cakewalk.

Lexi: That's just it! You're so skilled at funkin' that you make light work of even the deadliest opponents!

Lexi: There are thousands of people who admire what you do...

Boyfriend: Yeah... your hat, hair and shirt made that REEEEEAL subtle.

Lexi: Was that supposed to be sarcasm? I'm not good at sarcasm.

Lexi: BUT IT'S OK! All that matters is that I'm right here, next to my idol, in the flesh!

Boyfriend: So, what'll it be? You want me to sign something, take a selfie?

Lexi: I was wondering if maaaaaybe we could sing a song?

Boyfriend: Sorry, but I just got done singing songs with literal gods. I'm kinda burnt out on the vocal department.

Girlfriend: Awww, come on Boyfriend! She really cares about you.

Boyfriend: Alright, fine, but only because Girlfriend seems so insistent on it.

Lexi: AWESOME! I promise I'll make this worth your time!

Boyfriend: Glad you liked it, because now I'm exhausted.

Boyfriend: It was fun while it lasted, but me and Girlfriend are gonna hit the sack.

Girlfriend: Have a good afternoon, Lexi! We'll see you around!

Lexi: I uh... I actually came prepared to sing songs.

Boyfriend: I'm very sorry Lexi, but I don't think I can physically force out another note.

Girlfriend: Are you guilt tripping us right now?

Lexi: PFFFFFT. What? Of course not!

Girlfriend: Meh, at least you're honest.

Boyfriend: Alright fine, but this better be a short one.

Boyfriend: I'm starting to see crazy stuff now... feels like I could pass out in approximately 2 minutes, give or take.

Lexi: Oddly specific, but works for me!

Lexi: I hope you enjoy this one as much as I do!

(Boyfriend passes out from exhaustion. Girlfriend looks at him and gets shocked. Lexi then hits Girlfriend with a tranquilizer dart, causing her to pass out as well. Lexi sighs and calls the Unofficial Boyfriend Fanpage in a crowd while Boyfriend and Girlfriend are asleep. The crowd then goes to Boyfriend to see him. Boyfriend wakes up to see that he is surrounded by fangirls.)

Boyfriend: W-What do you mean "surprise"?

Lexi: Look around! I gathered up the whole Unofficial Boyfriend Fanpage community to this very spot!

Lexi: While you were sleeping on that sidewalk, we all came together and formed a crowd!

Lexi: Now, EVERYBODY gets to meet you!

Boyfriend: What? You... surrounded me in FANGIRLS?

Boyfriend: Awesome? One fangirl was PLENTY! I just wanted to go home, and now you have me SURROUNDED?

Boyfriend: I fell asleep on COLD ASPHALT because YOU stopped me in my tracks!

Lexi: I uh I didn't realize you would feel this way...

Boyfriend: Wait a minute...WHAT DID YOU DO WITH GIRLFRIEND?

Boyfriend: CROWD SURFING? If that's true, it certainly wasn't at her own will!

Boyfriend: Girlfriend HATES people putting their hands all over her, except for MINE!

Lexi: Listen, I don't know what happened to her! She probably got lost in the crowd somewhere, but couldn't have gone far!

Lexi: I thought I was doing something nice by letting you meet up with people who care about you!

Boyfriend: Save the sob story for later, Lexi... we can talk about this as soon as I get Girlfriend back.

Boyfriend: But in the meantime, I'd say were due for a song 3, wouldn't you?

Girlfriend: I saw you fall asleep on the sidewalk, and everything suddenly went dark...

Girlfriend: And when I woke up, I was being crowd surfed by a bunch of LEXI CLONES!

Lexi: Hey, those aren't clones, those are my friends!

Boyfriend: Girlfriend, that's... that's awful! Somebody must have done something to you!

Boyfriend: And I think I may have a wild guess as to who it was...

Lexi: I didn't do anything to Girlfriend, I swear!

Lexi: All I did was put her to sleep with a tranquilizer dart, but nothing bad or anything!

Boyfriend: WHY WOULD YOU DO SOMETHING LIKE THAT IN YOUR RIGHT MIND?

Lexi: I was just... making sure my plan wouldn't have any disruptions of anything...

Boyfriend: BY SHOOTING MY GIRLFRIEND WITH A DART?

Boyfriend: And what PLAN are you even talking about?

Lexi: I knew you were going to fall asleep by the end of my second song.

Lexi: It was no coincidence that you were surrounded when you woke up.

Lexi: But look, you're crowded with admirers! Don't you like it?

Boyfriend: NO, I most certainly do NOT like it!

Boyfriend: And what you're saying is that you sucked every last ounce of energy out of my body...

Boyfriend: ...and shot my girlfriend with a dart...

Boyfriend: ...just to get what you and your friends wanted?

Lexi: I mean, that's only half of it, but I guess that's one way to put it.

Boyfriend: Come on Girlfriend, let's get out of here before she puts you in danger again.

Girlfriend: Lexi... I sincerely hope you get whatever help you need.

Boyfriend: And don't even THINK about following us home!

Lexi's Friend 1: You shot his Girlfriend with a TRANQUILIZER DART to get us here?

Lexi: Yeah, only because I thought it was what you wanted...

Lexi's Friend 1: You didn't tell us you were gonna do that! I thought you'd just ask them nicely or something!

Lexi's Friend 1: Do you not see how wrong that is?

Lexi's Friend 2: Yeah, Lexi... my entire life revolves around obsessing over Boyfriend, and even I think that was too extreme.

Lexi: I thought I was doing something nice the whole time...

Lexi: For both of you all AND Boyfriend...

Lexi: I guess I was too focused on meeting my idol to realize the harm I caused to achieve it.

Lexi's Friend 3: Well, what we do now? Our idol hates us, and we just made and awful image of ourselves.

Lexi: ...maybe it's time we give up on the whole fangirling gig.

Lexi: Not just because of Boyfriend snapping at me... as much as it stings, I think the reaction was warranted.

Lexi: But this whole situation has made me realize how nothing good comes out of us obsessing over him at such extreme levels.

Lexi: I'll always admire him and his work, but it's time to stop making it our only defining trait.

Lexi's Friend 1: Actually, I've been wanting to step down from the Unofficial Boyfriend Fanpage for a while.

Lexi's Friend 1: I've been wanting to expand my account into digital art for a long time!

Lexi's Friend 3: I'm okay with giving up fangirling. I hate people knowing me online as the "Boyfriend Lover".

Lexi's Friend 3: I want people to start liking me for who I really am!

Lexi's Friend 2: I never liked Boyfriend anyway, I just wanted to be a part of a friend group!

Garcello: I don't even know how I got here.

Lexi: Wow, I didn't expect the decision to be so... unanimous.

Lexi: It looks like it's settled then! Let's leave all of this behind us and start becoming our own people!

Lexi: I guess I won't be needing this cheap cosplay anymore...

Lexi: Come on, guys, let's go back to my place and have our first Non-Boyfriend related hangout!

Boyfriend falling asleep at the end of Nightfall.

Boyfriend waking up before Fandemonium.

The banner of her WIP Gamebanana page