Funkipedia Mods Wiki
Register
Don't have an account?
Sign In
Advertisement
in: Mods with missing downloads, Unreleased, Characters,
and 2 more

Advendure
Friday Night Funkin' (As a mod)
Rivals of Aether

Feri is a modded character for the upcoming "Friday Night Funkin': VS Plantoids" Mod, She's the third and final opponent of the First Plantoid Week. Her song is Star Fruits. Due to being a famous plantoid popstar, she's not going to go down that easily.

Feri is a plantoid with magenta eyes, a ponytail headleaf, with a green torso and blue legs. Her size is fairly big and she wears a grayish tanktop with a red heart emblem on it. She's using her trademark microphone that has a brownish handle.

Feri is a Feri Berry born into the Chosen Family (see Fire for a description of the Chosen Family). Losing basically all of her family during her youth left her a bit lost in life. She stayed in school she did what she needed to do and she was mostly happy. Choir was her favorite class and she excelled at it more than any other Plantoid in the school, after school she started performing locally around her home town, gaining popularity slowly. Then one day she got a contract from some people from the capital, asking her to perform on the big stage, that day went perfectly. She slowly became the most popular plantoid in the capital! Creating many rivals due to her popularity.

Feri was wandering the Elder Tree's Forest when she came face to face with the God of Plantoids himself! The Elder seemed happy to see one member of the Chosen Family is still alive, and appointed her as the guardian of his forest, now whenever she enters the Elder's Forest she enters a powerful state that makes her strength rival the Plantoid Gods themselves.

The Succubus and the Spooky Curse

One October evening while wandering the Elder's Forest keeping watch, she ran into a oddly attractive Plantoid. as she investigated, she was suddenly captured. The plantoid reveals to be the Succubus Plantoid! And she CURSES Feri with a terrifyingly cute curse! Now during October, she transforms into what is simply called "Spooky Feri", a lustful darker form of Feri who follows a strategy of wandering the forests at night and sucking the life force out of anyone she gets her hands on, not enough to kill but enough to knock 'em out cold. 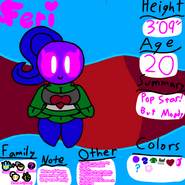 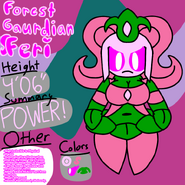 Feri's Reference Sheet when she's in her Forest Guardian form