Funkipedia Mods Wiki
Register
Don't have an account?
Sign In
Advertisement
in: Mods with missing downloads, Unreleased, Characters,
and 6 more

FUCK YOU, IT'S NOT DONE YET! - Shadow

Were you perhaps looking for a different Fire?

Fire is a modded character for the upcoming "Friday Night Funkin': VS Plantoids" Mod. He's the first opponent of the first Plantoid Week. His song is Ember.

Fire is a ghost plantoid with gold eyes, a petalish shape headleaf, with a small ghost tail, he wears a grey jacket with a red circle emblem on it, similar to Feri's tanktop with it's red heart. He's turned his wand into a microphone which he's put in his left hand. He doesn't look very confident in singing.

Fire is a Pyro Berry born from the Chosen Plantoid Family (the Chosen Family refer to the family that is only made up of made-up species, like the Pyro Berry or Feri Berry). It is unknown how he died... but after his death he came back as a ghost, without his memories and his body gone without a trace, left to wander the realm for the rest of time. Eventually he ran into Feri, now a popular popstar, and something clicked with him. Something clicked with her as well and they became close friends working together, eventually meeting the rest of the Plantoids who now live in Feri's house, meeting his girlfriend Kaleigh and saving the world from the Succubus Plantoid and a 4th dimensional invader. 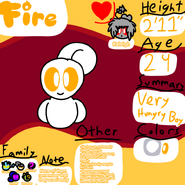