this article is about The character

, not to be confused with The song of the same name

“Hey SHORTSTACK! Get outta here, this is a CONSTRUCTION ZONE!”

“Yeah, and I'm gonna NAIL you to THIS TOWER unless you buzz off!”
― Baritonne and Flatline in Boppin' Batch

Flatline is a robot built by Daddy Dearest to rival Boyfriend. He first appeared in a mod of Friday Night Funkin' called V.S. Flatline Full Week created by Seatlaw, ChargingTurnip, and CT_Radio.

Flatline takes the appearance of a robot with a heart monitor as a head, wearing a black hoodie, black shorts with a white stripe, and black shoes.

Flatline is a generally moody and easily aggravated person, but very passionate. He is also generally an idiot. 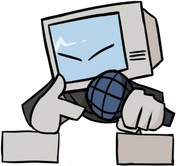 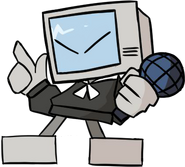 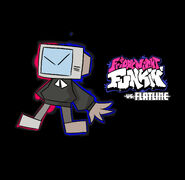 Art of Flatline created for the GameBanana page 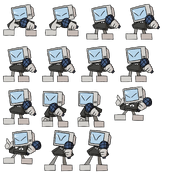 The unfinished 3D model of Flatline, which can be found among the game's files.