For more information, head to their page on the BFDI wiki.

Four is a number and the main host of BFB. Four and their co-host X first appeared in the 2008 video "X Finds Out His Value". They appear to be abstract beings representing real-life numbers, letters, or algebraic variables.

Four is a poorly-drawn Arabic numeral four (the "open" version). They are mainly covered in blue skin, with their limbs being more lightly-colored. They have white sclera with black pupils, along with a tuft of fur on their chest (which is more noticable in their singing sprites.) They appear as a mod over Daddy Dearest, and a host in BFB (until Announcer just came back in BFB 28).

The campaign menu UI for the mod. 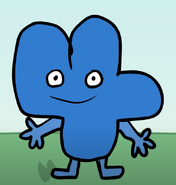