“Not many people make it out alive. Are ya ready?”
― French Fry Guy, Friday Night Funkin'

French Fry Guy is a former singer turned Police Officer. He has a short temper, like Whitty. He works under the Vero Beach Police Department, or the V.B.P.D, and is found over on the boardwalk from the hotel. He has no previous beef with previous mod protagonists. He is a orange, crispy like human "mutant". French Fry Guy is a mostly friendly protagonist, but will fight back if provoked.

French Fry Guy's first appearance was in a comic titled with the same name. It is not available online, however. You would need to ask the creator, [1]Cipherz Gaming YT, for a copy of it. The comic goes as follows, "A plain, run of the mill lookin' guy is trying to get a job at the V.B.P.D, but things turn south when he is straight up completed rejected. Whilst he was inside, toxic waste removers left a barrel full of it out, and someone left their fries on top of it. When he walks out, he slips, and the fries and him mutate together, and the rest is history."

He was born on March 18, 1994, in Pennsylvania. He is 27 years old, male, and is single. French Fry Guy has been around since 2017, but only in the form of physical paper copies of comics. This mod will mark the first time he has technically made an appearance online, as a character. The artwork provided was made by [2]caffinated.sam on Instagram. The mod is still currently in development, but will be releasing soon, but at least the end of May 2021.

The week is titled "Beach Brawl ft. French Fry Guy", and the tracks, which are not yet completed, are called "Vero", "Riptide", and "Brutality". There is an extra bonus track, titled "Fired".

Before we move to trivia, I would like to thank our sponsor NORD VPN

- Maegan is stalking you 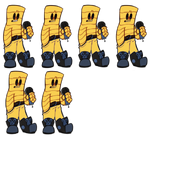 As he appears in the menu.

Beach background for the mod

Beach foreground for the mod.

Boyfriend: Huh? Where are we?

French Fry Guy: Not many people make it out alive.

French Fry Guy: Are ya ready?

Boyfriend: Hey, that wasn't so bad! Pretty easy if I do say so myself!

French Fry Guy: So, let's do something more chill, aye?

Boyfriend: Fine by me.

French Fry Guy: DAMN YOU! HOW ARE YOU SO GOOD?

French Fry Guy: So you really like rapping, huh, BF?

French Fry Guy: How about something...faster?