Funkipedia Mods Wiki
Register
Don't have an account?
Sign In
Advertisement
in: Characters, Outdated, Work in progress mods,
and 11 more

Reason: The mod's out, time to get to work!

Friday Night Funkin': Big Swingin' Sister is a mod made by Juno Songs, the same creator of the Shinobi Scramble mod. This mod pits Boyfriend against Girlfriend's big sister, Sister Searest! Play against this jazz-embroiled cool cat and her band and see how you can blend old-school jazz with new-school rap!

One day, Girlfriend invites Boyfriend to see her older sister at her college. To their surprise, Searest is having band practice with her jazz band! Searest greets herself to BF and insist on playing some tunes! It's time to ring it back to the 20's and show them who's got the moves!

Sister Searest is one of Girlfriend's older sisters, a vocalist and trumpet player, and the leader of her college jazz combo. She is a graduate student who attends a New England area school, studying for a master's degree in music.[1] Sister is a friendly young 23-year-old woman[2], described on the mod's page as "hip but doting." She uses slang commonly used by jazz musicians during the mid-20th century. Sister leads her jazz combo's rehearsals on Tuesdays and Fridays, setting up in the band room to practice their music. Unlike much of her family, Searest is actually laid-back and good-natured by default; as a matter of fact, she dislikes taking mortal souls, thinking it's "for squares."[3] Though she's considered a bit of a black sheep due to her kindness, she doesn't let her family ties get to her amiable demeanor and love for jazz.[4]

As a demon, she has the power of pyrokinesis, but she usually restricts this to minor or mundane applications such as making small, controlled sparks while snapping, using little flames as a reading light, or boiling water to make instant ramen (in the absence of an electric kettle, which she is not permitted to have in her college dormitory[5]). When her pyrokinesis activates, her ahoge lights on fire.[6] She refuses to use her demonic powers for violence, and when prompted by Boyfriend to show the true extent of her powers, she curtly refuses. 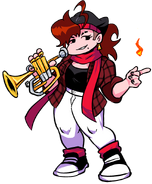 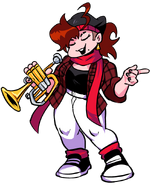 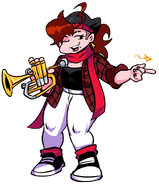 Sister sitting on the speaker with Girlfriend during Epiphany.

Sister flustered during that one part of Heavy Leftin 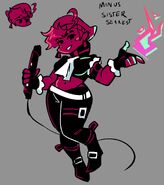 Theo Parker is the band's pianist. He is a young 23-year old African-American man who is described as a chill, relaxed, lovable guy who appreciates the quieter small-college lifestyle. He is studious, often sitting behind his piano doing homework in rehearsal when there's downtime, but he's always ready to go on the piano when it's time to play. He's a friendly and encouraging gentle giant and gives Boyfriend good vibes and kind words. He lives in the Manhattan borough of New York City. 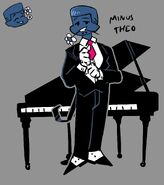 "Shorty" Collins is the band's tenor saxophone player. His nickname comes from his short stature, but what he lacks in height he more than makes up for in personality, as a witty, fast-talking reckless flirt (who still respects boundaries). He is a history and social sciences major who simply plays in the jazz combo for fun, and his favorite genre of jazz is bebop, calling it an "art". He lives in Kenosha, Wisconsin. 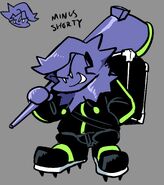 Raquel Vasquez is the band's upright bass player. A lively and talkative Puerto Rican woman, Raquel is the youngest (and tallest) of the jazz combo. Raquel moved to Chicago, Illinois from Puerto Rico when she was young. Her favorite jazz genres are Latin and bossa nova, and her favorite foods are Chicago-style hot dogs and deep dish pizza. Raquel is shown to be high-energy and somewhat emotional, as while Boyfriend is altogether unfazed by most opponents he has faced, Raquel assumes he would need emotional support after seeing so many characters try to actively kill him. 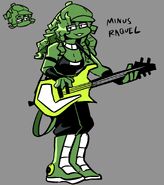 Minji Kim is the band's drummer; while she loves jazz, she's primarily a rock drummer, and is also a fan of Daddy Dearest's work from back in his heyday. They are Korean-American. Described as a bit of a hardass when it comes to rehearsal and performance etiquette (as she tells the band to concentrate during the gig in week 2), she's firm but never intentionally unpleasant, and is generally otherwise cool and collected. They live in Laguna Beach, California.

Girlfriend: Great! My boyfriend and I came down to visit.

Boyfriend: yo what up

Sister Searest: So you're the Boyfriend G's been talkin' so much about, eh?

Sister Searest: Heard through the grapevine you were somethin' of a musician.

Sister Searest: Lemme introduce you to the band. We were just in the middle of a rehearsal.

Sister Searest: On piano, we got Theo; ask anyone and they'll tell you he's got flyin' fingers.

Sister Searest: Theo, I see you workin' on homework back there. Say hi to B.

Theo: Heh. You didn't tell me we had guests. 'Sup, little dude.

Shorty: Well, aren't you a handsome fella? How 'bout I show you how I play the--

Sister Searest: On the ol' upright bass is Raquel.

Raquel: [GASP] What is this SLANDER?!

Raquel: I'd LOVE to get to know your sister and her boyfriend!

Sister Searest: Finally, we have the lovely Minji, who keeps us on time with the drums.

Sister Searest: We all know she's kinda the backbone of the group.

Minji: But seriously. Nice to meet ya.

Girlfriend: Ooh! SIs! What if Boyfriend joined you guys for today?

Sister Searest: Music to my ears. Let's start off easy.

Sister Searest: Take it from the top, guys.

Sister Searest: You doin' good, B! Smooth moves back there.

Sister Searest: You sure know how to pick 'em, G.

Sister Searest: Right on. Ready to turn up the heat?

Sister Searest: Swankified. Good to see you keepin' up, B. You've got some serious chops!

Sister Searest: Hey, how'd you know what we're playin' next?

Sister Searest: Hope you've got plenty more where that came from, hotshot. You ready for the last one?

Boyfriend: bruh what about your third phase transformation

Boyfriend: can we see them

Sister Searest: Hot stuff! Now THAT is what I'm talkin' about!

Sister Searest: Hahaha! You're one hep cat, B.

Sister Searest: If you weren't so busy scatting at everyone you see like G says, I'd invite you to join the combo.

Sister Searest: The other stipulation's that you have to be a student here.

Girlfriend: Thanks for letting us sit in on your rehearsal, Sis!

Sister Searest: Hey, no problemo, G, you and your man just stay cool.

Sister Searest: And B, just lemme know when you wanna start callin' me "Sister-In-Law Searest."

Boyfriend: ayo this is lit ngl

Sister Searest: Yea, I'll text G if we can book the show; you're welcome to join us on stage if we do.

Sister Searest: Though I know it's a bit of a drive.

Sister Searest: Regardless, if you ever wanna just jam, you're always welcome to swing on by here for a li'l freeplay.

Girlfriend: Are you breaking the fourth wall?

Sister Searest: Heyyyy! G! B! You made it!

Girlfriend: I wouldn't miss this show for the world, Sis! Especially since Boyfriend's going to be joining you!

Boyfriend: ayo what up

???: Hope you're all warmed up and ready to go. We're playing for a pretty big crowd.

Boyfriend: yep. I'll take anything you throw at me

???: What's this? Do mine ears deceive me? He's not just beeping and booping?

Boyfriend: yea you guys are tight and also not tryna kill me so

???: Just know you can always trust us to listen to if you ever have anything you need to say.

Sister Searest: Alright, well, it looks like the crowd's all settled in.

Sister Searest: Whaddaya say we just put the rubber to the road?

Sister Searest: Alright. let's start off with one I call "Fireplace."

Sister Searest: Great to hear you've still got the chops, hotshot. That was fire.

Boyfriend: that sure puts the beep in my boop

Sister Searest: Aight, Theo, your tune's up next.

Theo: Right on, right on.

Theo: So, Boyfriend. Sister tells me you're no stranger to singin' with demons, right?

Theo: Huh. Well, hopefully this'll all be a bit of a change of pace for you.

Boyfriend: it's nice not to be constantly fighting demons

Theo: Word. We gonna be bringin' it down low for this one. Keep things real nice and smooth. You game?

Boyfriend: let's do it

Ditto but black and white