What have I done? Friday Night Funkin': Entity... forgive me. - Smiler

The development or possible updates of this mod have been canceled, so a release of its new content is not expected. The reasons for this vary, such as: controversies, lack or loss of interest, the disappearance of the "passion" for the mod, or simply a lack of ideas.

Reason: TheInnuendo has annouced that the mod has been canceled. [1]. Despite this the planned A.G.O.T.I remaster is still coming[2] along with the Solazar chapter of the mod.
Upcoming Content

Reason: Aside from the demo being very well-recieved by the public, this mod is a continuation of VS. A.G.O.T.I, one of the most well-known mods ever.

Reason: The articles now almost complete, and the only things that are msising are Boyfriend's shaded sprites from Godrays and Promenade, and Girlfriend's animated sprites from Shotgun Shell.

Were you looking for the prequel, Entity Origins: BREAKOUT?

As this mod is only a demo and has no dialogue or cutscenes, no plot is apparent during gameplay. However, context clues are given via the settings the characters are located in.

In Shotgun-Shell, Boyfriend and Girlfriend encounter Aldryx in a grocery store where they begin to sing together.

In Parasite, the plot appears to be the same as the first rendition of VS. A.G.O.T.I., where Boyfriend, Girlfriend, and A.G.O.T.I. are all trapped in the void.

In Promenade, Boyfriend encounters Nikusa alone in what appears to be a large church or castle hall with stained glass windows. Girlfriend is nowhere to be seen.

(Note: They will always and permanently be in Separate Pages.)
​

Aldryx — An agent of Solazar's and A.G.O.T.I.'s older brother and the first opponent of the mod. (Originally meant to replace A.G.O.T.I, but later he became its own character)

A.G.O.T.I. — A prisoner in the void and the second opponent of the mod.

⠀Solazar — Father figure to Aldryx and Agoti and the third opponent of the mod.

Nikusa — the Queen of the Void and final opponent of the mod.

Note: Depsite Entity being cancelled the A.G.O.T.I remaster and the Solazer chapter are still planned to come out[3]

Note: None of those cameos are canon on Entity story. 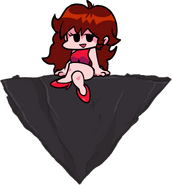 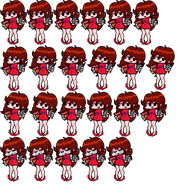 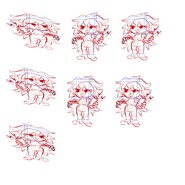 The new background for A.G.O.T.I.'s week

Spritesheet for the discs in Freeplay 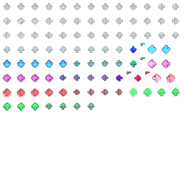 The arrow assets for the mod