Reason: This article has spoilers for XTale, Underverse, and the mod itself.

What did you just said? You just said i can't dip my balls in the soda dispenser? I thought this was America: land of the free, home of the brave. I fought for this country! I served in Vietnam in 1967! - Freddy Fazbear

If it isn't the internet's brand new plaything... - Weegee

Reason: Read this if you wanna know.

Reason: Controversy aside, this is still one of the most downloaded mods out there, mostly because of the "Full Week Golden Age", and the songs certainly have their fans. With that being said, however, this mod is also the least memorable on the Golden Throne, likely because Nyx didn't bother to make voices for X!Chara, X!Gaster and Ink!Sans. Also their voices are placed inside the instrumental, making it hard to use the characters for covers.

Friday Night Funkin': X-Event, also called The X Event, is a mod that adds both Xtale and Underverse interpretations of Undertale characters into Friday Night Funkin' / is an Undertale AU (Alternative Universe) mod. The antagonists in this mod are X!Chara, Ink!Sans, and XGaster. This mod includes a new week called Week X, and the week title is X-Event, featuring the songs Overwrite, Inking Mistake and Relighted.


X!Chara is a character from XTale by Jael Peñaloza, also starring in Underverse. He now appears in the mod Friday Night Funkin': X-Event as the first opponent.

In this mod, XChara takes on his child form instead of his adult form as seen in XTale and Underverse Season One and Two. XChara appears to be a white-skinned child. He wears a black shirt with a white scarf-like coat on his neck that covers his entire shirt and sports spiky, white hair. He has a golden heart-shaped locket. He also wears some black shorts with white shoes, and in this mod, he holds a microphone in his left hand. He also has heterochromia - one eye being red and the other purple - and his right eye has a vertical scar on around it.

XChara as he appeared on the main menu of the mod, before being replaced by X!Gaster. 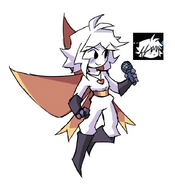 X!Chara yelling at Frisk, threatening to fire them. 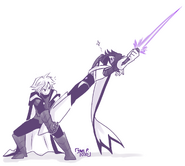 
Ink!Sans is the second antagonist in the X-Event mod, and a major character that appears in Underverse. He is the deuteragonist of Underverse Season 1 and is a minor character in XTale. In his original source material, he is the protector and guardian of all Alternate Universes, also called AUs. This iteration of Ink!Sans has him refraining from drinking his vials in order to become emotionless and help his friend X!Gaster with his plan.

Ink!Sans appears as a skeleton with black eyes and white pupils, he has a brown long scarf. He has a dark-brown, orange and white shirt with dark-brown and white sleeves, on his back there is a giant brush. He has a sort-of chain-like bag with empty little bottles, he has brown and cyan fingerless gloves and wears skirt-like pants that are dark-brown too. 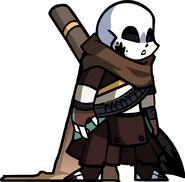 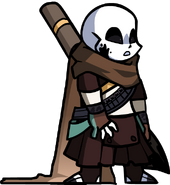 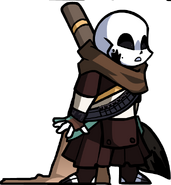 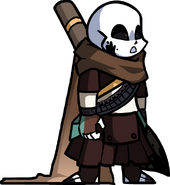 The background for Inking Mistake. 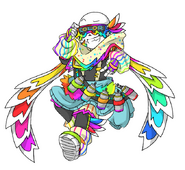 The old and classic design of Ink.

“For example, you are here to entertain me. Your consciousness remains intact because I find your frustration enjoyable. Now, let's let your teammates do their job, shall we?”
― XGaster explaining to X!Chara why he isn't under his control, Underverse 0.5 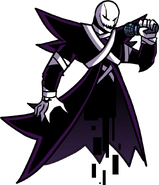 XGaster in the Relight cutscene. 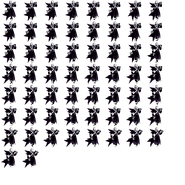 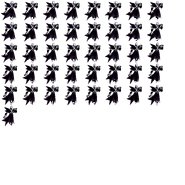 Note: All of these cameos are not canon to X-Event story or the X-Event mod story:

X!Chara: I will tell you a little secret...

X!Chara: At some point, I considered becoming a singer.

X!Chara: You really think so? Ok then, here I go!

Ink!Sans: Everyone is talking a lot about you lately.

Ink!Sans: They're going to forget you.

Ink!Sans: They're going to replace you. Give up.

Do not harass anyone involved please and thanks

The Controversy is not over, But Nyx has left the community a long time ago and is no longer a relevant figure so this has died down a lot.

TL;DR: Nyx stated that he dislikes Friday Night Funkin, it's community, and Newgrounds with it's "degenerate" behaviour according to him. But since he created this mod, it lead to people believing that he made this mod for clout. There's also arguments about the quality of the charting. Ninjamuffin himself called Nyx out by calling him a "parasite". Nyx's wife, Jael Penaloza, has asked everyone to drop the whole situation and, stated that Nyx has "moved on". Then his mod was taken down for not being open source, which Nyx thought was unfair because he made and finished the mod before the rule was made.

The mod's creator, NyxTheShield (who has created several pieces of music for Underverse, Glitchtale, and XTale), came under fire for arguing against and blocking countless people who support Ninjamuffin. He hates Ninjamuffin99, and has called him "racist" and a "Nazi". This came as a surprise to many of his fans, who are used to him being more calm and level-headed. He also hates the Friday Night Funkin' community, due to them being "apologists" and Newgrounds as a whole because it allows "degenerate" behavior. Many people who defend Newgrounds stated that Nyx's charts are poorly made, which he defends by saying that they're difficult and not poorly charted. There are also rumors he has been making the mod for clout (note that his videos on the topic have gotten more views than his other videos). He has also complained how YouTube "forced him to jump into a fandom he doesn't enjoy", yet he has made many videos on his YouTube channel about Friday Night Funkin' (including streams). He also has reportedly blocked people on Twitter that criticise this. Ninjamuffin himself called Nyx out on Twitter for "disrespecting Newgrounds", going so far as to refer to him as a "parasite". Also in this thread, Kadedev said he sucked. Jael Penaloza (The creator of Underverse and XTale and wife to Nyx) has asked people harassing Nyx to "drop it, he's moved on" instead of letting themself apologize and take responsibility for anything that happened. Later, Nyx's mod was taken down after being reported by 4 people for not being open source. The 4 reports happened at the same time, so it was likely planned. So Nyx made a video with a new download link and claimed that it was unfair because the rule was directed to people who made the mod AFTER the rule was released and not before.

Recently, Nyx quote tweeted a tweet where he responded with "'Been almost a year and we still have discourse about calling fast patterns spam lol. Nyx and ESimplyJ went off until Jan 22 where Nyx made this "tweet.. 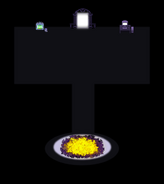 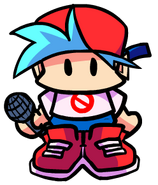 The background during Overwrite

The background during Inking Mistake

The Overworld before encountering X!Gaster

The background during Relighted

The star that appears next to objects you can interact with