Reason: Kitty Killjoy, her being a Stalker and all. And Pumpkin Monster/Babble's appearance may be disturbing to some. Also, Darnell comes from the Pico series. You know the drill.

Get ready to move your pingas! - Mario

Friday Night Funkin' Flip Side is a mod featuring unused and/or background characters from the original game. Flip-Side will feature seven main weeks, with alternative erect difficulties, a week dedicated to Ethan (a god amongst men, and coder for Flip-Side), and an extra week featuring the rest of the devs. The mod is still ongoing, so either follow the official Twitter account or Discord server for more updates.

Boyfriend is a character created by the FNF Team, and given a fresh new look by Team Flipped! He is the main protagonist in the full mod. 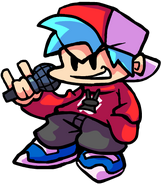 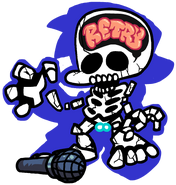 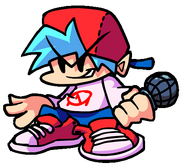 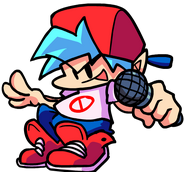 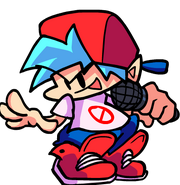 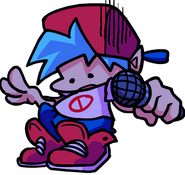 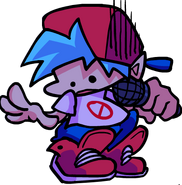 Girlfriend is a character created by the FNF Team, and given a fresh new look by Team Flipped!

Girlfriend is a young, light-skinned female with long auburn hair. She wears a form-fitting red dress underneath of a black jacket, black thigh-high heel boots, a black garter belt, golden hoop earrings and a golden necklace. Her fingernails are painted red. 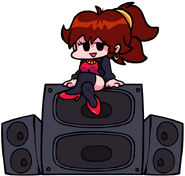 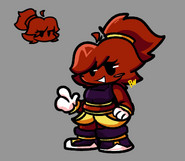 Minus Flipside Girlfriend made by Freshwoomy 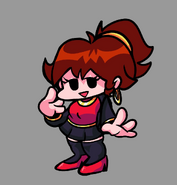 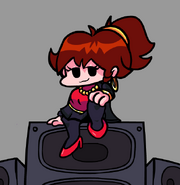 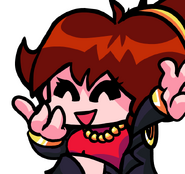 Friday Night Funkin’ (Scrapped character in files for the Mom)

Friday Night Funkin’ (Scrapped character in files for the Mom)

“I kidnapped- err... Invited you over because I want to sing with you. So what'd ya say, The Boyfriend?”
― Stalker Girl, Untrue Love


Not to be confused with Nekofreak.

Stalker Girl is a character created by the FNF Team, and modded in by Team Flipped. The Stalker Girl, while the Boyfriend and Girlfriend were out doing something, she knocked out Boyfriend, and dragged him back to her bedroom. Will he make it out alive? She is Week 1 in the full mod.

Stalker Girl wears an aqua beanie with black stripes. She has black hair covering up one of her eyes. She also has a pink microphone, with a sticker of a star on it. She also wears a purple shirt, and black pants, as well as black boots. 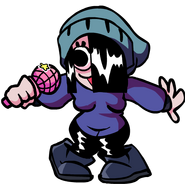 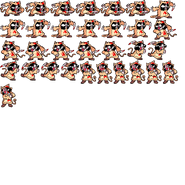 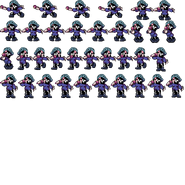 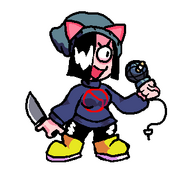 The original concept designs for the stalker and her cat

Ditto, but with the bloodied cat outfit

Ditto, but with an entirely different design

“Why was this doll laughing?”
― Roy, Spooky Month 4 - Deadly Smiles

Roy is a character created by Sr.Pelo, and modded in by Team Flipped. Roy, while taking a walk Boyfriend and Girlfriend are confronted by the Hatzgang, Roy challenges "The Boyfriend" to a rap battle. Will he win? He is Week 2 in the full mod.

Roy wears a blue baseball cap, with an orange, yellow striped sweater, black pants and black shoes. He is the shortest and leader of the trio. He has light brown curly hair, and has darkened circles just above his black eyes. Roy is typically seen with a large and mischievous grin, most likely up to no good. 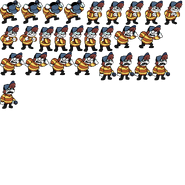 Not to be confused with Pulp

Pumpkin Monster is a character created by the FNF Team, and modded in by Team Flipped. After your vengeful battle with Roy, out of nowhere comes out a monster in the shape of a pumpkin. Everyone has left including your Girlfriend, What do you do? Will you make it out alive? They take the place of Monster in the full mod.

Pumpkin Monster has two blood shot eyes. They have a pumpkin as a body. They also cannot speak. 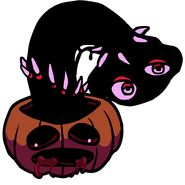 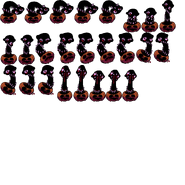 Not to be confused with Darnell

Darnell is a character originally created by Tom Fulp, which is also the creator of Pico's School, and modded in by Team Flipped. He's Week 3 of the mod, unfortunately accompanied by The Überkids in the second and third songs.

Darnell has tall black hair which swipes up in a sharp arc to the left, and white sclerae with no pupils as a stylistic choice. He wears a purple shirt with bright yellow sleeves and dark blue trousers. He also wears brick red sneakers with golden yellow soles. 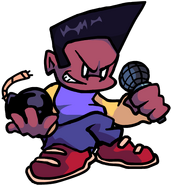 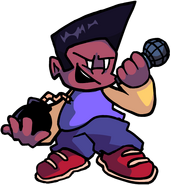 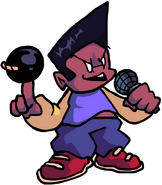 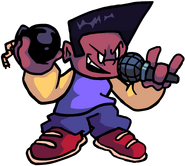 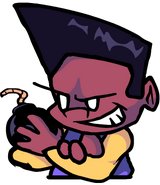 Darnell, as he appears in Week 5


Carlos is a character created by Zavemann, based off of the Henchmen. After getting stood up by Mommy Mearest during a rematch, Carlos comes out, and is totally on board with being funked with! Hope Boyfriend doesn't mind the multiple other Henchmen dancing in the back! He will be Week 4 in the full mod.

Carlos looks like a standard Backup Dancer, black horns, black hair, red skin, sunglasses covering their eyes, but what differs them from the rest is the gold tooth in their mouth (oddly though his gold tooth is blue in his normal icon).

Carlos in the Dance title.

Ethan is one of the main coders for Flip-side, and modded in by Team Flipped. Ethan has no feet. Cry about it! He's the main antagonist in Week Σ (Sigma).

Ethan wears a black Adidas branded hoodie with black sweatpants. He has dark brown hair with black eyes. He also has a flipflop, with green footers. He has no feet. 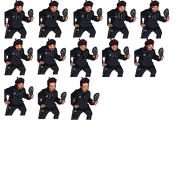 Simply EJ is one of the developers of Flip-side, and modded in by Team Flipped. He has 1 song exclusive to the freeplay menu.

EJ wears a Green Shirt with Blue Pants and a White Belt. He has brown hair with black eyes. 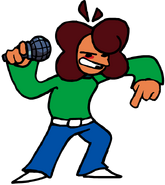 Reason: In chimp out and go fish ethan screams loudly

Note: Babble has no dialogue.

Stalker Girl: You're finally awake! (I was starting to worry I hit your head too hard...)

Stalker Girl: Where are you?

Stalker Girl: You're in my room, silly!

Stalker Girl: Who am i?

Stalker Girl: Why I'm your biggest fan, of course!

Stalker Girl: I kidnapped- err... "Invited" you over because I want to sing with you.

Stalker Girl: So what'd ya say, "The Boyfriend"?

Stalker Girl: Alrighty then, it's a date! <3

Stalker Girl: W-wow! You're really great at this singing thing.

Stalker Girl: How about another song???

Stalker Girl: You wouldn't say no to a face like that ahaha... Would you?

Stalker Girl: Why won't you fall in love with me?

Stalker Girl: I never had a chance from the start.

Stalker Girl: YOU WERE JUST LEADING ME ON THE WHOLE TIME!!

Stalker Girl: Then no one can.

Stalker Girl: What I'm saying is:

Stalker Girl: ME AND MY PRECIOUS LITTLE KITTY ARE GONNA MAKE MINCED MEAT OUT OF YOU!!!

Stalker Girl: (After one more song, of course.)

Roy: Where do you two pipsqueaks think you're going?

Roy: Watch the tongue, freak. Or me and my goons are gonna knock you can the chick into next month.

Robert: I'm... not sure i could hit the girl

Ross: Yeah, dude. We may be goons, but we're goons with standards.

Roy: CAN IT you two! Do you not understand what a threat is??

Ross: I'm just saying how it is take a breather, dude.

Skid: Our friends! What're you guys doing out here?

Roy: Getting ready to kick your butt, you little-!

Ross: Roy's peeved because he lost to a kid!

Roy: SHUT UP! You just got lucky that time, I'm sure to beat you this song!

Skid: You know what goes best with a song?

Skid: You have to have the Spooky Dance on Spooky Month!

Roy: QUIT IT! You losers need to stop doing that STUPID DANCE and help me pound these punks!!

Ross: Dude, you're kinda being a major buzzkill right now.

Roy: What? Hey, get back here!

Skid: Everybody's leaving! It's getting late, so we should go as well!

Roy: You freaks too? What the hell?!

Roy: Alright, you little creep. My goons might have ditched me but that doesn't mean i'm not gonna give you a beating into next week.

Roy: You want another rap battle? Fine. Call that your last meal loser.

Darnell: Hehe, i ain't seen you 'round this part of town in a hot minute.

Darnell: You and Pico still kickin' it?

Darnell: Well, we've got some catchin' up to do

Darnell: How 'bout we see if you still got it?

Darnell: You know what it is!

Darnell: You've yet to let me down lil' b.

Darnell: But now that these mofos are here, i got somethin' else at the top of my priority list.

Darnell: You tryna help me take care of 'em?

Darnell: Hell yeah. It's time to turn up the heat!

Darnell: Might've taken that "turn up the heat thing" too far.

Darnell: But at least we merked those fools.

Darnell: You right, you right.

Darnell: Les' do one last song before we ditch this flaming hunk-of-junk.

Boyfriend: Yoooo is that Nekofreak

EJ: Thats because they're both based off the same unused character

Ethan: well well well, look who's come to the gate

Ethan: yeah it's a beautiful place,

Ethan: too bad you're not getting in

Ethan: you wanna get in that badly? alright, beat me in a chimp-out and i'll consider it

Ethan: hey that wasn't that bad

Ethan: you wanna meet my pig

Ethan: but im warnin you now that nothing better happen to him or else you wont like what happens pig

Ethan: youve FUCKED UP this time

Ethan: nobody gets away with killing my pig like that

Ethan: youre comin with me to bubbleapolis pig

Ethan: down to the 7th circle

Ethan: this isnt gonna be fun for you pig

Carlos: Looks like triple M couldn't make it to your rematch, huh?

Carlos: I don't quite make the cut for your usual foe, though. I'm a little more freeform than your average spotlight hog.

Carlos: ...Your a real smooth talker, you know that?

Stalker Girl: You're finally awake! (I was worried I hit you too hard <3)

Stalker Girl: Where are you?

Stalker Girl: Who me?

Stalker Girl: Why I'm your biggest fan, of course!

Stalker Girl: I kidnapped- err... Invited you over because I want to sing with you.

Stalker Girl: So what'd ya say, The Boyfriend?

Stalker Girl: Alrighty then, it's a date!

Ethan Background in "Chimp Out" & "Pig Out"

Robert and Ross in "Bully" (Static)

Robert and Ross in "Trick" (Static)

Ethan's Pig in "Pig Out" 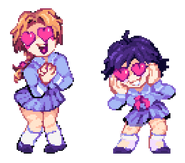 Image of Ethan found in the Flip-Side files 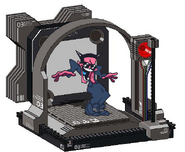 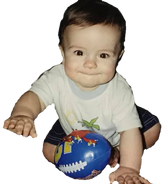 Ethan as a baby