Also, in Snow on Mount Silver, Blake and his pokemon end up dying due to frostbite.

Reason: Animated Unown's alphabet assets, the loading screen animation along with its sprites, the pendulums, An audio file with the original Hypno Pokémon cry (Which is what Left Unchecked Hypno's voice is based on and be from Gen 6 onward), the spacebar animation, and the static noises. Also we STILL need the Strangled Red teaser that presumably got posted and any of Gengar's poses.

Upcoming: It has been confirmed that there will be an update to the mod with more Pokemon creepypastas, such as Buried Alive, Mount Silver, Strangled Red and possibly more

Reason: The mod was well received among the community

Reason: Pokémon as a whole belongs to Gamefreak, The Pokémon Company, and Nintendo. (Though MissingNo. is unofficial, and is not really intended to exist)

FNF Lullaby is a mod created by Banbuds. It mostly revolves around the Pokémon creepypastas Hypno’s Lullaby, Lost Silver, Buried Alive (Upcoming), and Easter Egg: Snow on Mount Silver (Upcoming) with the glitch Pokemon "MissingNo," appearing in a bonus song. This mod was released at approximately midnight on Halloween. It is the first mod where the player has to press a button rhythmically and type certain sentences.

Boyfriend is missing late at night, GF is worried about him and went looking for him by herself. She then encounters a strange figure next to a bloody path leading into the woods along with a weird looking building that she's never seen before. The stranger is probably a nice guy and has nothing ominous in mind right? But she's not the only one going through some trouble though.

Want to know more about Girlfriend?

Girlfriend is a playable protagonist in Hypno's Lullaby. She is playable in Safety Lullaby and Left Unchecked.

Girlfriend wears a red beanie with white trim, a red shirt, a black jacket with a righthand breast pocket, cuffed denim jeans, and red heels. Her shirt and jacket resemble her mother's clothing. Her brunette hair is messed up. 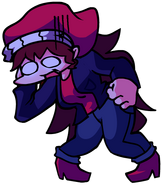 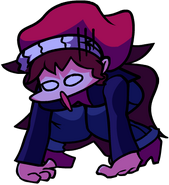 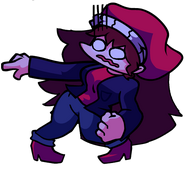 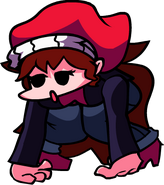 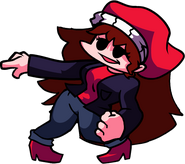 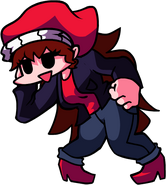 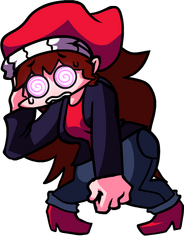 Ditto but while the player is pressing 'Retry'

Ditto but after the player presses 'Retry' 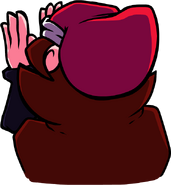 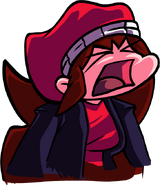 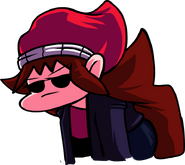 "Man, where's that cute blue dwarf and his magnum dick..." 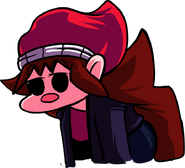 Girlfriend's reaction to Hypno saying "Follow me into the forest, I saw him in there"

Hypno is the main antagonist of Hypno's Lullaby, a Pokémon creepypasta where he kidnaps children.

Hypno appears as a human-like yellow Pokémon with a yellow body, long nose, white neck fur, black eyes, fox-like ears, and no visible mouth. He is also holding a pendulum made from a silver ring attached to a string.
In Left Unchecked Hypno has channeled all of his psychic energy into his pendulum, causing it to hover in the air while growing and increasing in size, and ripping his head gruesomely off of his body from strain, although his psychic powers keep him alive. His mouth is now present, and veins connecting his head to his body are also present. His body seems to be very mutilated. His head spasms around violently in the air while his body lies lifeless. 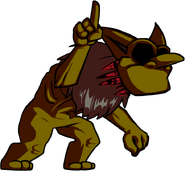 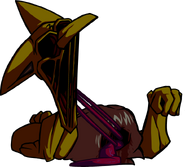 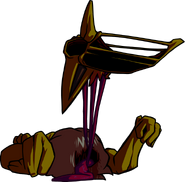 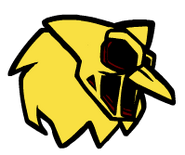 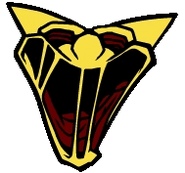 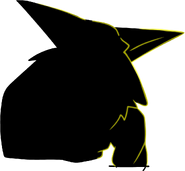 Hypno's pendulum in Left Unchecked and Monochrome (Only in hell mode) 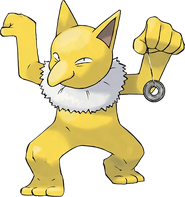 Reason: Screech voice clip is much louder than the multiple IM DEAD clips

N/A (Red in the jumpscare)

Want to know more about Gold and the story of Pokemon Lost Silver? Click here

Gold (known as Ethan in Pokémon HeartGold and Pokémon SoulSilver) is the main protagonist of the famous creepypasta Lost Silver. Long after the events of the creepypasta, he has become nothing more than a sad and empty husk, kept alive by the Unowns. He does not want to kill Boyfriend, as he is emotionless and nearly mindless, simply returning to the solace of the darkness if Boyfriend fails.

Gold appears to be the pale, limbless corpse of a boy with hollowed eyes and spiky black hair. He wears a backwards cap, a jacket with a zipper and a pair of shorts. He can extend his jaw to lengths beyond what is anatomically possible, and a black substance can be seen oozing out of his empty eye sockets. He is motionless during his idle, but he has a small amount of animation in the form of line boil, similarly to Bogus 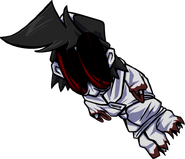 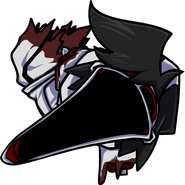 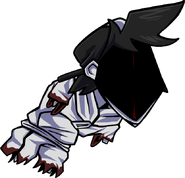 Gold appearing at the start of Monochrome

MissingNo., short for "Missing Number" and sometimes spelled without the period, is an unofficial Pokémon species found in the video games Pokémon Red and Blue. Due to the programming of certain in-game events, players can encounter MissingNo. via a glitch. It is also known to be a powerful being in certain creepypastas.

Multiple MissingNo's exist, but the one used here is the Red and Blue Normal MissingNo, which appears to be a mostly blue, scrambled block-like chunk of "fuzz" commonly described as a "backward L-shape". Other MissingNo's are Ghost, Kabutops Fossil, Aerodactyl Fossil and Yellow Normal, which appears for the right, left, up and down respectively. (MissingNo. transforms into the lattermost MissingNo. while the others simply protrude out of it.)

All Poses (Including The Idle) 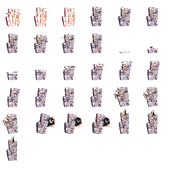 Buried Alive is an upcoming character coming soon to the mod. It is a code script said to be a final boss for the Pokemon Tower in Lavender Town in Pokemon Red and Blue. He also replaced the Marowak ghost. 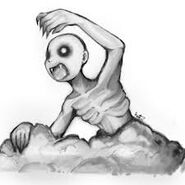 Gengar is an upcoming character coming soon in the mod. It is one of the Pokemon that Buried Alive has that appears in the same song as It's trainer 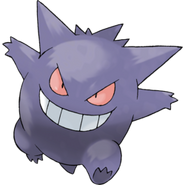 Blake, also known as Gold is the main protagonist of Snow on Mount Silver and was confirmed in the frosty teaser.

Silver is the opponent of Insomnia.

During Left Unchecked, Safety Lullaby and Monochrome (Hell Mode), Hypno's Pendulum will swing throughout the entirety of the song. the player has to press the spacebar with each time the pendulum is at it's lowest point (the easiest method is hitting spacebar to the metronome/beat). If the player does not keep up with the pendulum, the screen will slowly get redder and the humming noise in the background will become louder until GF (BF in Monochrome) becomes completely hypnotized. Continuing to press spacebar with the right timing can reverse this effect. In addition to this, Hypno will regularly distract the player by using Psyshock, creating a bright flash of pink-red light with a loud sound effect. Psyshock will greatly increase the on-screen static and can even kill the player if they have not fought off the hypnotism enough. The pendulum is on Hypno's left hand in Safety Lullaby, and on the foreground in every other appearances. Hypno's songs in Hell Mode has the pendulum swing faster.

Left Unchecked will end with Hypno using Psyshock multiple times until the screen goes red; this is simply a jumpscare and will trigger the next cutscene.

During Monochrome and Missingno (Hell Mode), sometimes the screen will go red, with Unowns and an empty text box appearing. The player will need to type out whatever the Unown text translates to before the timer runs out or Boyfriend will be instantly blueballed. Previously, in Missingno (Hell Mode), the Unowns would only spell out "MISSINGNO" once. This has been changed in Version 1.1.0, where it now has more phrases, plus it occurring throughout the song instead of once, sometimes going as far as to appear during the player's turn, rendering a FC impossible as it appears as soon as the player's first note appears. The timer's length in beats is:

During Monochrome, Celebi will appear 3 times. Whenever Celebi appears, it will use Perish Song, decreasing the player's minimum health. The first use drops the max health to 66%, the second to 50% and the third to 40%. Gold will also scream, and at random screams, a unsettling jumpscare will appear, that means there's actually a chance that the screen will be covered by a jumpscare which obscures everything. this is because the "Jumpscare" Event triggers every scream with the chance's percent being 8.

There is a mode called Pussy Mode, which removes every mechanic except for Gold's jumpscare during Monochrome. (It also certifies the player as a pussy.)

There's another mode, called Hell Mode, which adds more mechanics to songs such as Monochrome and Missingno. and makes them much harder. (It also certifies the player as a gamer.)

These messages may only be encountered while having the Hell Mode option enabled in settings.

Note: Every Gold warning says the same sentence but with different voice tones

You wanna sing? But the BG isn't finished yet! - BBPanzu

Note: Blake's icon is from Mount Silver over Lost Silver

(BF is missing, GF went out by herself looking for him worried sick...)

Hypno: You're looking for a blue dwarf, child?

Hypno: Follow me into the forest, I saw him in there

(The player is given the option of Yes or No)

(The mysterious figure runs away and the song, Monochrome, starts)

???: Wrap it up stalling Staniel

???: Totally a normal game I got here

???: Show your shitty viewers your skills

The White Hand's animation on Safety Lullaby and Left Unchecked 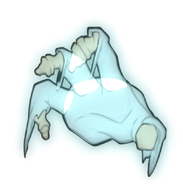 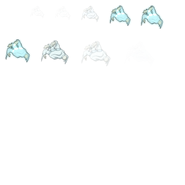 Alphabet of Unown (For Monochrome and Hell Mode Missingno) 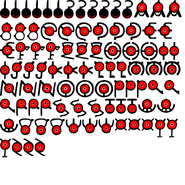 Assets for Unown during Monochrome 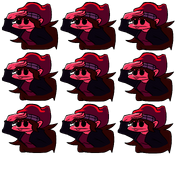 GF in the title screen

GF in the initial loading screen, holding up her finger, telling you to be patient 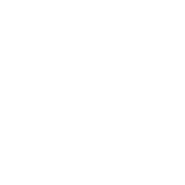 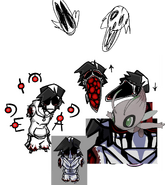 Ditto, but with a little less Images (Note: We Can See Boyfriend Without More Images)

Sketch of A Gold Moveset

The Background used in Safety Lullaby and Left Unchecked

The Background used in Monochrome (It's just black, Nothing important.)

The Background used in MissingNo

Boyfriend's icons, which is seen in Monochrome.