Reason: Ronald's cannibal form, and the fact that he became a meme in the older days, and he has similar powers to Shaggy.

This page is out of date, which means the mod has either released or received the long-awaited update. Remove this template only when at least more than half of the new content is present on the page.
Don't forget to always check social media in case more trivia has been posted.

Reason: The pre demo uploaded to YouTube[1] has some things which will either be changed or removed due to Mad!Wolf being removed from the development team.

As of now currently this mod, puts Ronald McDonald, as the main antagonist, replacing Monster, in Winter Horrorland, with the mod being created by InukoExo.

Were you looking for Ronald in his appearance in Showtime!?

“I have an idea!”
― Ronald McDonald, Rivals of Aether

Ronald McDonald is the mascot of the McDonalds fast food company. While you may think that’s all he is, you’d be dead wrong! He is a extremely powerful character, comparable to Shaggy and Matt! He has terrorized the worlds of YTP, MUGEN, Rivals of Aether, and now Friday Night Funkin’!!

Phase 1 Form
His design is very much the same. No longer a reskin, Ronald's remastered design is now towering over Bf, as he is canonically 7ft tall. His burger mic no longer has any lines on the "buns". Ronald McDonald also is shown to have a red tie, as its moves about in some of his new poses. This detail replaces the red zipper the real Ronald has across his torso.

Phase 2 Form
In his phase 2 form, he mostly appears almost identical to his phase 1 form with a few differences, such as having a darker shade over the top of his head in all poses, as well as having the "Menacing" Japanese symbols over him. He now has white pupils along within his black eyes, and has no mic. His poses (except the up) are changed into fighting moves referencing sprites from MUGEN.

Golden Form
He is now a gold color, as expected. He now is less slouched, standing upright, tall and mighty, with his hands to the sides, and his tie majestically flying in the air.

He is now completely purple-themed, with stars all over his afro. He now looks to be floating, and his eyes are filled with purple only instead of bearing pupils.

Ronald McDonald's notable look is him wearing yellow clothes, a red and white striped shirt, yellow gloves, and red clown shoes with yellow laces. His face is white, with red afro and a big red smile; all in all, his appearance matches the colors of McDonald's. Instead of the traditional greyscale microphone, the handle is now yellow, with the rest of it being mostly brown with some green, supposedly meant to resemble a burger. In the "easy" difficulty of his song, he gains a more golden appearance, as well as white pupils. And his Cosmic appearance, he's has stars in his afro like space, along with being purple-themed. 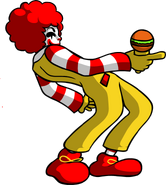 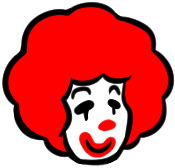 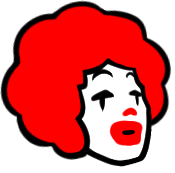 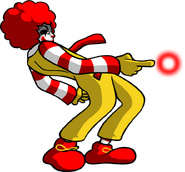 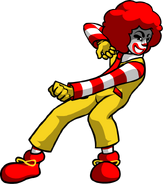 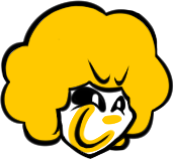 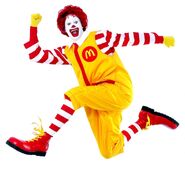 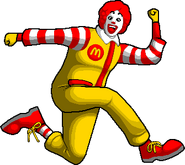 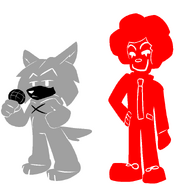 Exo and Ronald on Vs. OURPLE GUY

An art by Exo that how would be if Ronald had a B-Side and a D-Side version.

MUGEN (MUGEN)
InukoExo (Director and artist of the FNF mod)

P-Clown is a character created by MUGEN, who has a similar appearance to Ronald. He is planned to face Boyfriend in the song "Purple Idea".

P-Clown has a similar appearence to Ronald since he is also a clown. While he does have most of Ronald's features; he has some differences like for instance, purple stripes on his uniform and a purple colored afro. He also has red eyes rather than the usual black eyes for most of the characters in the mod. 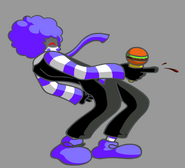 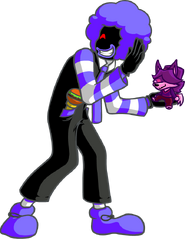 MUGEN (MUGEN)
InukoExo (Director and artist of the FNF mod)

The Will of Hades is another character created by MUGEN. 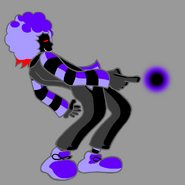 The Will of Hades' Down Pose

Cannibal Ronald: Ronald's colors are the same, but darker and desaturated some. Shade covers his eyes and his afro is more wide. He stands in a squat and wields a severed arm holding a mic. His smile has no red in its lips, only bearing wicked sharp fangs. 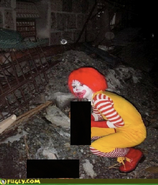 Minus Ronald: The winning design featured a small red and white-schemed clown with an afro in the form of a jack-in-the-box. Its body is attached to a spring coming from a big box with the letter M. His sleeves are striped, and his shirt says the letters R Mc D as a condensed version of the full name. 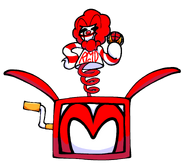 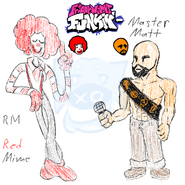 Sketches of ideas for Minus Ronald McDonald and Matt by InukoExo

A set of four uniquely colored n stylized arrows resembling the likes of Tangy BBQ, Spicy Buffalo, Honey Mustard, and Sweet 'n Sour have been revealed to have the special mechanic of five times they can be pressed without punishment before the sixth one instantly kills. This is meant to resemble how eating too much fast food can kill you, according to InukoExo.[7]

This is comparable to the mechanic of the Deathwish arrows from Friday Night Madness.

For reference, here are the actual sauces they're based on:

*Small note, the update of the colors were due to the creator not wanting to cause confusion of the ketchup arrow with the regular red, along with removing the mayo to prevent confusion with an upcoming arrow type with white as its dominant color[8]

The tree with Mayor McCheese's head and condiments

A look at the chart for the old version of a song known as "The Idea". (Shared by Ran Ran within twitter.)