View source
watch 01:36
We're Getting Mutants in the MCU - The Loop
Do you like this video?
Play Sound
Discontinued

Shit can neva go right with you white Friday Night Funkin in a Wimpy days around. - HD Darnell

The development or possible updates of this mod have been canceled, so a release of its new content is not expected. The reasons for this vary, such as: controversies, lack or loss of interest, the disappearance of the "passion" for the mod, or simply a lack of ideas.

Reason: On July 26, 2022, the mod was cancelled by the creator because "it was too boring to continue to work in it".

Issues Present: Greg's idle is slightly blurry, and the Rowley icon has white edges (Greg's and Rodrick's Icons too).

Note: In the same twitter post mentioned above, Cótiles stated that they would not be releasing assets or songs. This likely also includes any builds that were made.

Reason: We need info about Manny, Frank, and Rowley.

"Friday Night Funkin in a Wimpy day" was a mod created by Cótiles and some other people. The mod was, aptly, themed and named after the famous Diary Of A Wimpy Kid book series, written and illustrated by author Jeff Kinney. The titular character of the series, Greg Heffley seems to be the main antagonist while his family members, Rodrick, Manny, (his dad) Frank, (his mom) Susan and his best friend, Rowley would've been appearing in at least one or two songs as the antagonist respectively.

Oh yeah! Forgot to mention he has his own wiki. Access here

Diary of a Wimpy Kid
Vs. Greg Heffley

“OK, let me get something straight: This is a JOURNAL, not a diary. I know what it says on the cover, but when Mom went out to buy this thing I SPECIFICALLY told her to get one that didn't say "diary" on it. Great. All I need is some jerk to catch me carrying this book around and get the wrong idea.”
― Greg, Diary of a Wimpy Kid

Greg Heffley is the main character of the Diary Of A Wimpy Kid franchise. In this mod, Boyfriend comes to challenge him in a wimpy day.

Greg is a tall, stick figure-esque human drawn in a completely monochromatic fashion. Greg has three strands of hair protruding from his head. Greg wears a white shirt, black shorts, and white socks and shoes. Greg is also wearing his backpack during the mod, which is black with white straps. Greg's microphone has a black tip and a white handle.

All of Greg's poses 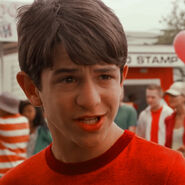 Greg's appearance in the film (for reference)


Rodrick Heffley is one of the characters that B.F faces in this mod. He owns a van and his band’s name is "LÖDED DIPER", which is a misspelled version of what would originally be called Loaded Diaper. (This is due to Rodrick's confirmed inability to spell as seen in Dog Days.) Rodrick is planned to be the opponent in the song, "Rodrick Rules", which is named after the second book in the series, Rodrick Rules. He may have other planned songs in this mod, but it is not confirmed as of yet.

Rodrick, like his younger brother, is a tall, stick figure-esque human drawn in a monochromatic color scheme. Rodrick has five short strands of hair protruding from his head. Rodrick wears his band's black t-shirt during the mod. When fighting against him, Rodrick sits in his van, which is completely white, save for the wheels and the "LÖDED DIPER" logo plastered on it. 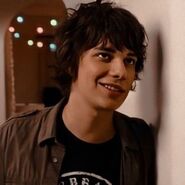 Rodrick's appearance in the wimpy kid film (for reference)

Black (books and mod)
Blonde (movie)
“ That's why I've come up with a new program that's going to reward you for spending time together. I'm calling it "Mom Bucks." Okay, now, for every hour that you spend together without fighting, for example, let's say you give Greg a drum lesson, you each earn a Mom Buck, which you can then trade in for one real dollar. So, to start you off, I'm giving you each five Mom Bucks. Now, if you're smart, you'll save up your Mom Bucks...”
― Susan, Diary of a Wimpy Kid: Rodrick Rules Movie

Susan Heffley is one of the characters that B.F faces in this mod. She is the wife of Frank Heffley. Susan is planned to be the opponent in two songs, "Mom Bucks" and "Karen".

Susan, just like the rest of her family, is a tall, stick figure type of human drawn in a black and white color scheme. Susan has hair drawn as two ovals and one of which has a hook shape at the end. Susan wears a white shirt both during the mod and in the book. She also wears black pants in the book and in the mod. When Susan fights against the boyfriend, you can see that she is smiling, which isn't that common for other characters in the mod.

Susan's appearance in the wimpy kid film (for reference)

“Lets me and you have a talk, FRIEND.”
― Frank, Diary of a Wimpy Kid

Frank's appearance in the wimpy kid film (for reference)

Manny appearance in the wimpy kid film (for reference)

“Can I -pant pant- Have a rest break?”
― Rowley, Diary of a Wimpy Kid: The Ugly Truth

Rowley's appearance in the wimpy kid film (for reference)

This Boyfriend variant is Boyfriend but he's from the Wimpy Kid universe, and is almost entirely in the style, while the normal Boyfriend isn't.

The Wimpy BF has 4 visible black strands of hair, and a white hat that looks too small for him. 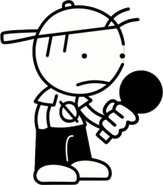 The BF in this mod is the normal BF who got sucked into the Wimpy Kid timeline. Aside from that, there isn't really that much to say about him.

In this mod, Boyfriend is drawn in the Wimpy Kid art style. He appears to have a short build and a square shaped hat.

Reason: Most of the voices are highly compressed, so they might sound loud to certain users. Also, Frank's song's instrumental is bass boost dubstep.

Missing (And will likely stay that way now. also, do not add any fanmade mod links here.)