Funkipedia Mods Wiki
Register
Don't have an account?
Sign In
Advertisement
in: Characters, Unfinished pages and stubs, Outdated,
and 24 more

Reason: Update came out. You know what we gotta do

Reason: Spoilers related to the Smoke 'Em Out Struggle (VS Garcello) Mod.

Loki is a character that appears in the Friday Night Gaming mod.

He appears to be a blue-colored Wolf who wears a white long-sleeve shirt with a red bandana around his neck with black pants, red shoes, and a giant tail. 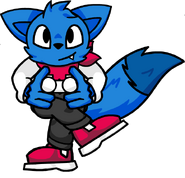 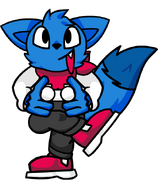 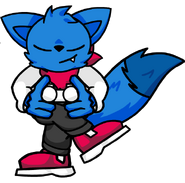 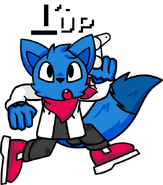 Loki jumping in Game On

Luke is a character that appears in the Friday Night Gaming mod.

Dony is a character that appears in the Friday Night Gaming mod.

Note: All of these cameos are not canon to Friday Night Gaming's story.

Boyfriend walks to a house)

Loki opens the door, looks at

Boyfriend and smiles at him)

Boyfriend: By the way why is Rebecca outside your window?

Loki: I dont know. All I know is that is her friend Ash. She did get out she hospital a few days ago its nice to see her out.

Loki: Hes doing good hes back to being the number 1 popstar

Boyfriend: Wow he must be super popular now !

Loki: HELL YEAH HE IS AND IM SO PROUD!!

Boyfriend: AY how about we stay up all night!

Boyfriend: Ok then how about one last game.

Loki: Ok I can do one more.

Loki: Imma beat ya this time!

Boyfriend: Oh really little ol you is gonna beat me !!!, That would be neat trick!

Luke: What are you doing in vr?

Luke: It's me Luke, Loki's brother you can talk to me.

Boyfriend: Be- oh yeah sorry it's just been a while.

Luke: Why are you in a dress?

Boyfriend: No idea but i look fabulous!!

Luke: Well while ya here wanna sing a old shanty you and Loki made.

Boyfriend: Sure lets do it!

Luke: I remember that song. You and Loki made it to impress some girl.

Boyfriend: Yeah im with her now her name is

Girlfriend. No idea where she is right now.

Boyfriend: She said she wanted to pet a fish in vr to see if it was like a real fish she should be back by now.

Luke: Wanna sing another song, like the one we sang when I met you?

Boyfriend: I have a question. Why do you keep bringing up the past?

Luke: Casue everything was simple back then, now its just taxes,work,sleep,and bills.

Boyfriend: I understand, Ive been in life or death situations with clowns, elves with snipers and stairs.

Luke: Well this is the last song for me. Imma go to Blackjacks then Dony's concert.

Boyfriend: OK then we might want to wrap this up.

Dony: BF, Is that you!? Its been a while, I'm shocked you're the lucky contestant.

Boyfriend: He said he was.

Boyfriend: You're even better than I remembered!

Dony: Yep,for the past few years Mrs. Mearst taught me everything I know.

Loki: Where is she anyways?

Boyfriend: Yeah lets not talk about how! Lets just move on.

Dony: You're pretty good at singing pop for a rapper!

Loki: You mean THE Miku!!

Loki: You have to inturduce me sometime!

Dony: Ok lets kick off the next song with a personal favorite of mine HOSHI!!

Boyfriend: Ok thats it for me I have to go find Gf so we can go find a cave, I heard its super rare?

Boyfriend: Ok ok Lets do this one more song !

Boyfriend sitting on the couch beside Loki, gaming with a joystick 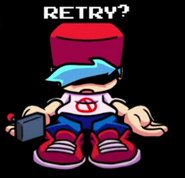 The Game Over Screen 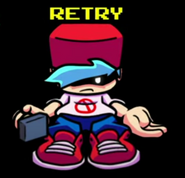 Boyfriend when you press the "Retry" button 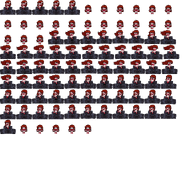 Confirmation of the type of console the gang is playing. 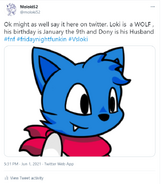