Funkipedia Mods Wiki
Register
Don't have an account?
Sign In
Advertisement
in: Characters, Mods with resolved controversy, Unfinished pages and stubs,
and 39 more

I'm not leaving you behind. - Boyfriend

Reason: El Taco who is a VERY controversial person within the community, has since been kicked from the mod[1].

Reason: Animated idles for almost everyone, the rest of the cutscenes, more info in trivia etc.

Reason: This mod has 3 creepypastas the first being Jeff the Killer, a famous creepypasta about a boy who becomes a psychopath after being immolated and having his face severely burnt. This caused him to go insane and burn off his own eyelids and carve a permanent smile into his face. He also slaughters his own family and breaks in households (which is counted as burglary, or breaking & entering), and kills his next victims. But if you just don't want spoilers, he has a bloody knife, a bloody smile, and other things that are gory. Then there is Slenderman and he doesn't even need an introduction because everybody knows him, and Gold is from a creepypasta about a dying Pokemon trainer who slowly gets more and more mutilated as the story goes on. And upcoming characters from other creepypastas are also appearing, being Luigi from the Super Mario World creepypasta I HATE YOU, Ben Drowned, Herobrine and Suicide Mouse

YOU GONNA COMPLAIN ABOUT IT, Friday Night Trepidation? - Tricky the Clown

Reason: Pokemon Lost Silver is a creepypasta about Gold, and how despite his enormous success as a Pokémon trainer in life, death still came for him in the end. Worse, he seemingly died nameless, alone, and forgotten.

Upcoming: The mod will be ported to the Psych Engine, the mod is also planning to have; New Boyfriend sprites, remaster of the backgrounds, new creepypasta characters[2].

that was insufferable - Bandu

Note: It has been privated on gamebanana.

Issues detected: Spelling should be checked over.

Friday Night Trepidation, formerly Friday Night Slashing: Jeff The Killer, is a mod with 10 songs where you rap against different creepypasta characters.

Jeffery Dan Woods, also known as Jeff the Killer is a famous and well-known creepypasta about a teenager, named Jeff, who goes insane after witnessing the end results of being bleached, and set on fire by a group of bullies at a party. Boyfriend has run into this psychotic killer and he wants his blood, right here right now.

Jeff The Killer has extremely pale skin, black hair with a Glasgow smile, and eyes wide open with his eyelids burned. He wears a dirty white hoodie with 2 dots above and black pants with red and white shoes. He holds a knife on his right hand, stained with blood and on his outfit too. 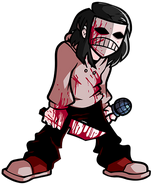 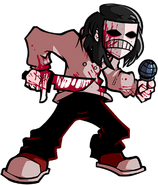 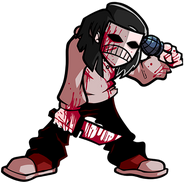 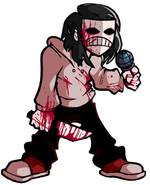 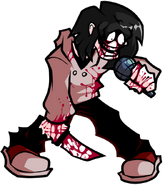 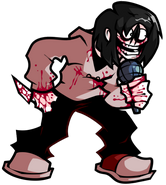 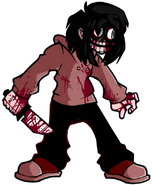 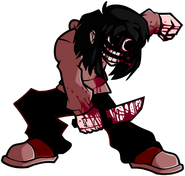 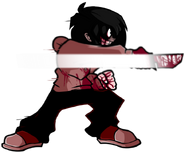 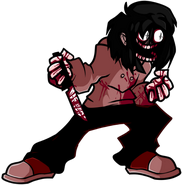 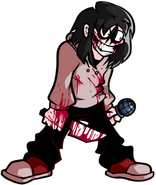 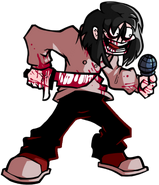 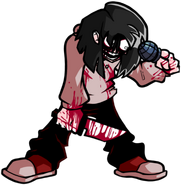 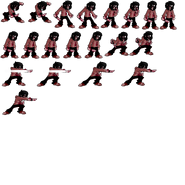 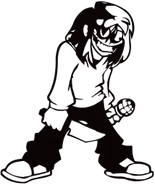 Jeff in the story mode menu (Unused in the latest version)

Not to be confused with Slenderman's original mod, even though it is that Slenderman in this one.

Slenderman is a supernatural creature who is known for roaming around forests.

Slenderman appears as a tall, lanky, human like figure, with tan skin, a black suit, pants and shoes. 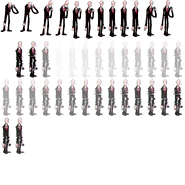 Were you looking for Banbuds' Gold?

Want to know more about Gold and the story of Pokemon Lost Silver? click here.

Gold is the protagonist of the creepypasta Pokemon: Lost Silver. He is the tortured ghost of a once great Pokemon trainer, held within a cartridge of Pokemon Silver. After Boyfriend and Girlfriend play the game and end up inside, he tries to convince them to escape so that they don't end up like him, before seemingly losing his mind.

Gold appears to be a limbless, pale Pokémon trainer with empty eyes. He wears a jacket. He has red eyes of varying design. He also has oddly pointy ears.

In Beyond Death, his face becomes pitch black, with a crudely drawn white smiley face on it. 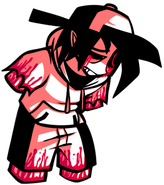 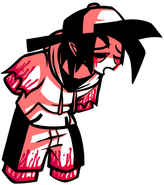 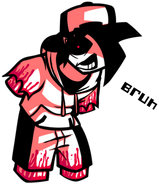 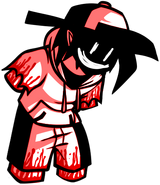 Beyond Death down pose

Beyond Death up pose 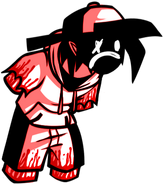 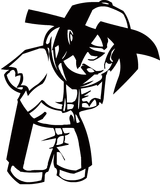 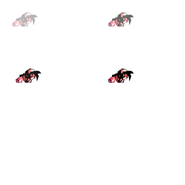 I HATE YOU Luigi comes from a ROM Hack of Super Mario World called I HATE YOU.

Luigi on the Version 2 teaser.

Ben Drowned is a creepypasta centered around a haunted copy of The Legend Of Zelda: Majora's Mask.

Ben Drowned on the Version 2 teaser.

Herobrine is a Minecraft creepypasta.

Herobrine on the Version 2 teaser.

Suicide Mouse (AKA Mouse.Avi) is a creepypasta of a lost episode of Mickey Mouse, and it is confirmed that he will appear in the mod but they are going to make a version more accurate to the comic by walt disney.[5]

Girlfriend: I have someone I'd like you to meet. He's very excited to meet you!

Boyfriend: Can't believe you called me here in the middle of the night…

[Jeff dashes across the screen, getting dirt on BF and GF.]

Girlfriend: What was that???

Boyfriend: I honestly don't even know..

[The screen zooms in on Jeff, who is staring downwards with a shadow over his face, text saying "KILL" flashes across the screen before the camera zooms over to Boyfriend as Jeff charges at him swinging his knife at him as the screen cuts to black and a loud slashing sound is heard]

[The screen fades back in to Boyfriend who now has a rip in his shirt revealing a bloody cut across his torso with the camera panning over to a crazed looking Jeff, the camera then pans over to Girlfriend who is angrily staring at Jeff with black static eyes and glowing red pupils while the screen shakes drastically, right as Girlfriend is about to kill Jeff, Boyfriend puts his hand in front of her which causes her to stop. The screen fades to black again before Endless Nightmare begins.]

[The screen glitches onto a scene of Boyfriend and Girlfriend standing near some fuel wagons with Slendermans legs being visible on the right side of the screen. Boyfriend then throws a microphone at Slenderman which lands on the ground in front of him]

Boyfriend: Where the hell am I?

Boyfriend: HOLY SHIT WHAT THE FUCK!!

Gold: What are you doing here. How did you reach here?

Boyfriend: What the fuck happened to you man...

Gold: You have to leave

Gold: The game will kill you too.

Gold: You're making a big mistake

Gold: I don't know who you are

Gold: or what your intentions are

Boyfriend: I really do not give a shit

Boyfriend: what makes me think I'm scared of the outcom-

Gold: Why didn't you listen..

Gold: GET OUT OF HERE

Gold: THIS IS YOUR LAST WARNING

Gold: I DON'T WANT THIS TO HAPPEN TO ANYONE ELSE

Gold: THE BURDEN IS UNBEARABLE

Boyfriend: out of all pokemon games, why this one bruh.

Boyfriend: shoulda been sword and shield

Gold: can you help me deez-

When you lose in Endless Nightmare, it brings you to a YouTube video called try again posted by a channel called Jeffrey Woods. The description has another YouTube link video called 4/10/2010. And a dialogue start:

Girlfriend: daddy who's the guy in the hoodie?

Girlfriend: Why can't you or mommy watch me?

Daddy Dearest: We have to perform tonight baby.

Daddy Dearest: Daddy's gonna go now. Try not to let your powers loose with this one, okay?

Daddy Dearest: *Walks to the babysitter*

Daddy Dearest: You are the only killer who can watch her. Try not to give me a reason to banish you. Understood?

The description has another YouTube link video called 11/10/2021, and another dialogue starts:

Girlfriend: I want you to meet someone tomorrow night.

Jeff The Killer: is it someone i can kill?

Girlfriend: You can try to, but i'd kill you before you lay a finger on him

Girlfriend: lol, try not to scare him too much! Byeee.

Jeff The Killer: Oh i'll definitely give him a scare..

So basically in 4/10/2010, Daddy Dearest hired Jeff The Killer to be Girlfriend's babysitter, while Daddy and Mommy perform tonight, and 11/10/2021 is the day when Girlfriend decided to show him to Boyfriend, but he didn't decided to scare him, and this day is when SDAMOS takes place with the cutscene, since Girlfriend said "I have someone I'd like you to meet. He's very excited to meet you!". 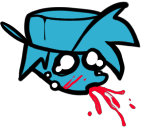 Boyfriend's danger icon for the mod 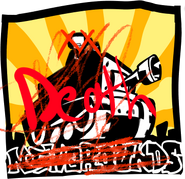 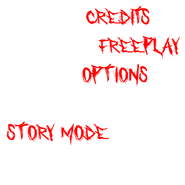