Well, one day you'll be not even a faint memory! - Smug Sun

Note: After being privated and withheld, the mod ultimately ended up being trashed.

Everyone is talking a lot about you lately. - Ink!Sans

Reason: Most of the music as well as various other assets were stolen which led to the mod creator privating the mod once he got caught.

Reason: The first song "Escape Reality" uses copyrighted music all over.[1]. Not to mention Shock contains a b-toned version of Blammed Starcatcher.

Not to be confused with Fuego

Fueg0 is an African-American man with shaggy black dreadlocks. He wears a red shirt with a red triangle at his left arm as well as white pants and shoes with red dots at the back. He also has a white hat with a dark grey bolt imprinted on it. He holds his microphone in his right hand with his left hand in his pockets.

During the entirety of Limit, his eyes glow white with signs of electricity coming out of it, as well as the bolt on his hat start glowing yellow, said electricity is also surrounding him, showing signs of super powers.

Girlfriend: I really had fun with you in the club!

Girlfriend: ..Who is that?

Girlfriend: Shall we pump some jams?

Fueg0: Yeah, I've been meaning to show this song to someone for a long time, so let's rock

Girlfriend: Nice to meet you too!

Girlfriend: That was funky indeed!

Girlfriend: Wow! For that long?

Fueg0: It took a looot of time and practice and I really wanted to pursue it.

Fueg0: Let's kick it off with another bop!

Fueg0: What did you say?

Fueg0: DON'T YOU EVER SAY THAT AGAIN.

Fueg0: You know, I've tried to keep myself together.. but NO!

Fueg0: YOU WILL SUFFER, AND THERE'S NO GOING BACK.

Fueg0: Don't worry. You didn't do anything. 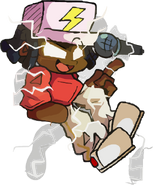