Reason: Funtime Foxy's extremely popular source game which goes by the name of Five Night's of Freddy's contains lots of blood, gore, abuse, etc & its up pose is a reference to it's jumpscare from Sister Location

Five Nights at Freddy's: Sister Location
“I’m sorry, but there was never enough room on this stage for both of us!”
― Funtime Foxy, Ultimate Custom Night


Not to be confused with Mangle.

Funtime Foxy appears as an antagonist in Five Nights at Freddy's: Sister Location. It wanted to kill Michael Afton during his shifts because it and the other animatronics wanted to wear his skin to escape Circus Baby's Entertainment and Rentals. It appears in a mod by ByThePowerOfDUSKULL and replaces Monster in Week 5.

Funtime Foxy appears as a white and pink animatronic fox. Its body is segmented by lines. It has a speaker on its chest and a red bowtie. It has four tufts of hair on its head. It also it has dark magenta cheeks, eyebrows, and lipstick. Its body has grey patches on its arms and legs. Its hands have pink palms, white fingers, and red nails. It has pink toenails on its toes. It also has a big tail behind it. It also has pink joints on his legs. Its endoskeleton is composed of multiple wires as seen on its neck. It, like the other animatronics, can open its "faceplates" as seen in its up animation. 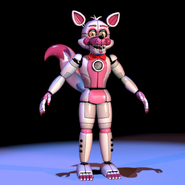 Funtime Foxy as it appears in Five Nights at Freddy's: Sister Location

Funtime Foxy As Appears Is In FNAF World