I Mean- hear me out dear... I didn't mean what I said back then, and I didn't mean for certain things to happen the way they did... - Daddy Dearest

Topic: Garcello dies while in a deal with Boyfriend. His soul was in the cigarette's smoke. He later fades away and is never to be seen again.

All I had in my mind were memories from a distant time... - The Smiler

Reason: 21k bytes, and this is bout to get bigger.

Reason: Rageminer believes the page is outdated. Please help us update it.

I will be a very happy bot if you say yes! - Hex

Reason: Garcello is the second most downloaded, viewed and liked mod on Gamebanana. The OST is also one of the most viewed out of any mod.

Upcoming: Smoke Em' Out Struggle Plus is soon to be released.

Black (as revealed in title screen and Artwork)

Garcello is a character made by Atsuover & Rageminer. He is a heavy smoker.

Garcello is a teal haired smoker, with a brown hat covering up his eyes. He wears a grey/black hoodie with a plain white t-shirt underneath. He has teal pants, brown boots, white fingerless gloves, and smokes a green cigarette. The smoke he emits, including the tip of his cigarette, matches the arrows' colors, suggesting it may be some kind of fantasy drug, not nicotine or tobacco. Similarly, in Release and Fading, his whole body cycles between the individual colors. During Nerves, he states that his chest feels funny, and starts sweating throughout the song. For Release, he just straight up dies, appearing as a ghost connected to the cigarette. He is now able to breathe out smoke. Meanwhile, for Fading, since the cigarette starts burning out, he gains more faded colors, and has an increase in transparency, before disappearing completely.

Garcello is a laid back man. Unlike most of the opponents in Friday Night Funkin' and its community of mods and headcanons, he is not evil or chaotic. As a matter of fact, he holds no form of grudge or hate towards Boyfriend and is even one of the few opponents he has faced who respects him. Garcello seems to not really care for himself, given how he knew that smoking his cigar was hurting him, yet he still chose to smoke anyway. He was rather accepting of his demise, as shown how he died with a smile on his face after performing his last song with Boyfriend.

Note: All of these cameos are not canon to Garcello's story.

Garcello: Did the smoke catch your attention?

Garcello: Yeah, it's pretty cool. You should try it out.

Garcello: Tell you what.

Garcello: If you beat me in a friendly little rap battle, I'll get off your case.

Garcello: Heh, that got you hyped up. It's settled then.

Garcello: As long as you don't mind me smoking a bit.

Garcello: That was fun, but my chest is starting to feel funny.

Garcello: I-I'm not giving up just yet though. You've got some tight bars, little man.

Garcello: Oh? You want me to keep going?

Garcello: F-fine by me. I'm enjoying this actually.

Garcello: Would ya look at that.

Garcello: I guess I overdid it, huh?

Garcello: I'd rather it be me than you.

Garcello: That hurt like hell, but it's probably better than what your girl's father was gonna do to me.

Garcello: I can't stay like this for too long, but...

Garcello: Even if our time was short...

Garcello: Let's end things off with a bang, little man.

Garcello: Would ya look at that - the sun's rising and I won't be awake for once.

Garcello: I didn't want this thing killin' ya. You're actually really cool.

Garcello: I would've loved to funk with ya more, but this is my fault.

Garcello: You two have a lot going on, and I don't want to add to it.

Garcello: I've got enough time for one last send off, little man.

Garcello: Would ya look at that.

Garcello: I guess I overdid it, huh?

Garcello: Can't believe my body's really back there.

Garcello: Even if our time was short...

Garcello: Let's end things off with a bang, little man.

Garcello: Would ya look at that - the sun's rising and I won't be awake for once.

Garcello: Sorry for dying on ya.

Garcello: I would've loved to funk some more, but this is my fault.

Garcello: I've still got time for one last send off, little man.

Garcello in the title screen.

Garcello before fading away.

Garcello static smiling before fading away. 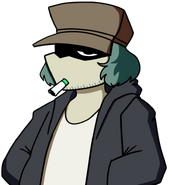 The background during Headache and Nerves.

The background during Release.

The background during Fading.

Cutscene that plays before Release.

Garcello's final words, and a dedication to him.

Timeskip AU Garcello, where he either stopped smoking or never did it in the first place

Old Garcello icons shown off on an atsuover stream 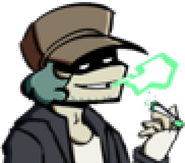