Friday Night Funkin' (As a Mod)

Friday Night Funkin' (As a Mod)

“Look I know the idea sucks, but it's for the sake of a semidecent plot.”
― Grunko, Pre-Ultra Blaster

Grunko is an alien who abducts Boyfriend and Girlfriend and is the main antagonist of Super Space Showdown, despite being a more friendly opponent.

Grunko bears an orange poncho and dark brown pants, along with a viking hat with one crimson-colored horn. He also has two purple antennae on his head.

When he gets scared, his hat gets slightly cracked and he has a much more frightened expression.

Note: None of these cameos are canon to Grunko's story.

Grunko: Okay, who did we bring in this ti--

Grunko: Man, I'm meeting my idol...anyway, can you please do me a favor?

Grunko: Look, uh, can you write a song for my planet's anthem?

Grunko: We should already have the microphone on, so let's begin!

Grunko: I'll warn you though, whoever composed this was probably deaf or something.

Grunko: Thanks man, I knew I could count on you! Now I can...

Grunko: Well I guess we can try again, but now I don't even remember the tune.

Grunko: I should have just written it down or something. That's beside the point though.

Grunko: Look, no time to explain! The spaceship's core is overflowing, our song generated too much energy!

Grunko: We might be able to activate the cooler if it didn't malfunction too!

Grunko: Look I know the idea sucks, but it's for the sake of a semi-decent plot. 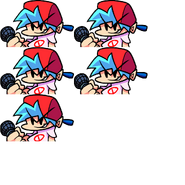