The Pico but Happy mod is a mod that adds in a more happier version of Pico in Friday Night Funkin, this is how he would have probably been if the shooting at his school never happened.

Happy Pico is very similar to Pico in the actual game, except he isn't holding his usual UZI, he doesn't have trust issues, he doesn't seem to be aggressive, and he has a brown backpack.

In his other poses, he can be seen holding objects, such as an apple [right pose] and a school exam graded A+ [left pose]

While in his Up pose, he just waves at Boyfriend indicating a "Hello!" and in the down pose he either wants to know him more or is asking a question, it can be seen by the question mark on his head. 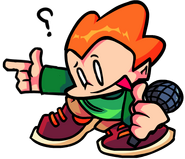 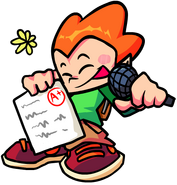