Reason: Source material "LISA: The Hopeful" is a fan game of "LISA: The Painful", a game rated Mature 17+ for drugs, alcohol, sexual themes, violence, language, and disturbing imagery such as themes of sacrifice, A.K.A. self-inflicted dismemberment, ruthless choices, russian roulette and so forth. This is carried over to this mod, especially his danger icon and its original appearance in LISA: The Hopeful.

Reason: Spoilers for LISA: The Hopeful

Leader of The Lovelies


Hart is the main antagonist and final boss of LISA: The Hopeful, he is the leader of The Lovelies, a ruthless army of sadistic perverts whose solitary goal is to locate the last girl in Backwater Olathe.

Hart is a tall, muscular light-skinned man. He wears a large black hood with torn sleeves and a mask of a broken heart that covers his face. Besides that, he also wears shoulder pads and a heart-shaped belt buckle.

As a Joy Mutant (in his losing icon), Hart, stylized as Heart, has his mask broken revealing clumps of his hair, his face twisted in pain. Blood and tears are visible in his eyes while his jaw appears to be splitting apart.

Hart is an aloof, mildly egocentric man. He speaks at a slow pace, reveling in whatever attention is given to him, and lashing out when someone attempts to take that spotlight from him. He shows a clear lack of care for anyone, happily kidnapping those that don't support him or outright killing them, and only shows a surface-level amount of consideration towards his Lovelies, only showing dismay over their deaths when it inconveniences him. This, combined with his stature, has made him an infamous figure in the place he resides in, much to his enjoyment.

Hart's lose icon, based on source.

The Lovely Convoy the mod takes place in.

Hart, as he appears in LISA: The Hopeful. 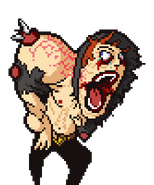 Hart's Joy Mutant form, Heart, as it appears in LISA: The Hopeful.

Semi-official artwork of Hart by SirFudgey, alongside other characters from LISA: The Hopeful.