Funkipedia Mods Wiki
Register
Don't have an account?
Sign In
Advertisement
in: Pages with copyrighted assets, Characters, Bbpanzu,
and 16 more

Reason: Hatsune Miku is developed by Crypton Future Media, Inc. and affiliated with YAMAHA Corporation and SEGA. Additionally, the mod's songs are copyrighted by producers not affiliated with the mod; playing a video that has the mod in it will cause Content ID to show up.

Not to be confused with the new version made by Evdial, GenoX, Bbpanzu, and others.

Hatsune Miku is a very popular Vocaloid and Boyfriend's sister. In this mod, she has 2 songs, being Miku and Hole-Dwelling. This Miku, while not as popular or well made as Evdial's Miku, was the first Miku mod, and one of the first mods made by bbpanzu before he found his footing and made mods such as Tord, Carol, and Sunday.

Hatsune Miku is shown to have cyan (or keppel) hair with pink hair bands, cyan eyes, and a smile. Her outfit has black sleeves with cyan trims, a suit with no sleeves with a cyan tie. Her skirt is black with - of course - a cyan trim with her shoes the same colour while gripping the microphone. She wears a happy expression while facing the Boyfriend. As a summary, she is depicted with her V2 design, her most well-known look.

(for immersive purposes, we'll use the Miku icons made by Evdial) 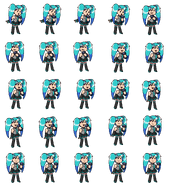