I have been here for a long time... - eteled

I'm GOING TO MAKE YOU LOSE ALL YOUR HOPE! - Taeyai

I can't help but want to share everything I know about the universe, it's in my code. - Kou

Reason: This article lists songs that are currently unreleased.

Reason: Epilepsy and when Hex gets hacked.

Reason: He was part for early Full Week era and gained more attention, it also helped that he was canonically friends with Whitty.

Hex, is a really chill Basketball playing AI created by YingYang48. He is a robot with a monitor for a face that can replicate various images. He appears in his own mod, VS. Hex as a main antagonist.

Hex's head resembles a television or a monitor and has two mangled antennas on top of it, a black screen and a smiling cyan face displayed on a screen. Hex has grey metal in place of skin, complete with black bolts that secure his limbs together and square, flat featureless feet.

He wears a white sleeveless basketball shirt with an orange number 16 symbol imprinted onto it, orange shorts with white stripes, and he goes around barefoot. He holds an orange mic upwards in his left hand, while his right hand rests on his hip.

During the final song Glitcher, he slouches with his hands on the side of his head. His face changes from dizzy to scared to a single red eyeball outline, presumably the virus. The reason for this is because the virus is unable to fully take control of Hex's motherboard, and Hex is trying to fight it off. Thankfully, he succeeded, as evident by the existence of Encore, the final song which is unlocked when the player completes Glitcher. As seen in Hex's backstory lore dump on Twitter it was also indirectly confirmed that he managed to survive the events of Glitcher and is now best friends with Whitty and Carol.

Hex was created when a lonely Rich Guy commissioned a high-robotics company to build a companion for him.[3] The company researched new features for the prototype bot, and eventually named the robot Hex.[4] Unfortunately, the CEO of the company got greedy when he realized the new features could make them tons of money if they mass produced such solutions to mainstream robotics. The CEO would later terminate the commission without Rich Guy's knowledge.[5]

Hex would later be deemed obsolete, have his power drained from him, and be put in a storage unit. Luckily for him, he was placed under a window, making his solar panels pick up energy.[6] When he woke up, he escaped his storage unit and hid somewhere nearby. Meanwhile, Rich Guy would find out the commission had been terminated, leaving him disappointed.[7] However, while heading home, he would find Hex in a bad condition. Once he realized that Hex was the robot he commissioned, he would take him home and they would be close pals.[8] While living together Rich Guy and Hex would do activities together such as basketball and karaoke.

Eventually, as years went by, Rich Guy passed away, leaving Hex with a ton of money but with no friends. This would leave Hex to engage in multiple activities to find people who would want to be friends with him.[9] He would later join a basketball team since it was one of his favorite things to do with Rich Guy before he died.[10] Despite all of this, Hex didn't have anyone he could truly consider a buddy. For example, another activity he would do with Rich Guy was karaoke. Since he died, Hex stopped singing. That is, until he met Boyfriend at the park.[11] Thanks to the events of the Hex mod, Hex became friends with Whitty and Carol.[12]

Note:Almost none of these cameos are canon to Hex's story in any way.

The Virus cameos in other mods

Note: Not all of these cameos are canon to Hex's story.

Note: Encore has no dialogue

Girlfriend: Geez... That was intense. Have you seen his face?

Girlfriend: At least now we can go to the park like we originally intended!

Girlfriend: You know, i really had fun during all those weeks spent with you.

Boyfriend: I'm glad you did...

Girlfriend: Makes we wonder who will be next to challenge you, pff.

Boyfriend: Are you another guy that's not cool with me dating her?

???: I just thought it would be fun to use my microphone after a long time!

Girlfriend: Hmm... he does seem chill, what do you think?

Boyfriend: If it's gonna be just for fun then I'm up for it!

Hex: I agree! We really maximalized the amount of fun we could've possibly had!

Hex: How about another round?

Boyfriend: Hmmm... what do you think?

Girlfriend: I don't mind it really...

Girlfriend: The sun is setting down so we have a nice vibe for another round.

Boyfriend: Bring it on Hex!

Hex: My circuits are ready!

Hex: Another great round! Vibing levels are off the charts!

Boyfriend: Yea, too bad the sun is gone now, and it's getting late.

Boyfriend: Should we get going?

Girlfriend: Probably, maybe i should call my parents that i'll be home soon.

Boyfriend: Aren't you an adult already?

Girlfriend: You should know more than anyone my parents worry too much.

Hex: Sorry to bust in but are you up for another one?

Boyfriend: Hmm, i dunno, like i said it will be night soon so...

Hex: Pretty please? I will be a very happy bot if you say yes!

Boyfriend: Hmmmmmmm, fine. Just this once.

Boyfriend: Huff.. puff... wow we spent a whole day on this.

Hex: Nope! Not yet at least.

Hex: My battery is solar-based so i'm saving energy at nights!

Boyfriend: Pff, lucky you then.

Girlfriend: I'm tired though... I think we should go now.

Boyfriend: Well, see ya around Hex!

Hex: I probably used too much processing power and let my guard down...

Hex: Something might have passed my defenses, which means...

Girlfriend: Huh? Wait, isn't that like, dangerous to machines?

Hex: I think it wants to take control over the system.

Boyfriend: Shoot... can't you do something to prevent that?

Hex: Wait. Maybe you can.

Hex: Grab my mic and fight that thing off!

Hex: If you order the system to input enough mic patterns it might crash.

Hex: Then i'll enter sleep mode and run a safety scan which will kill that thing.

Hex: Please! You're my only hope right now!

Boyfriend: ...Alright Hex, i'll try. I'm not leaving you behind.

Boyfriend: Are you ready? 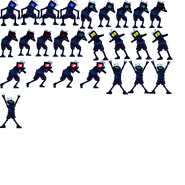 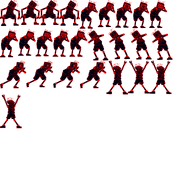 Hex's left pose. (Only one frame)

Hex's down animation during R.A.M.

Hex's up animation during R.A.M.

Hex's down animation during Glitcher.

Hex's up animation during Glitcher.

Hex’s static down pose during Glitcher.

Hex’s static up pose during Glitcher. 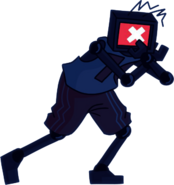 Hex in the story mode menu

Artwork of Whitty and Hex interacting. 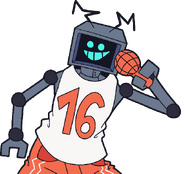 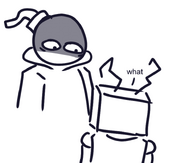 Artwork of Whitty's reaction to the pun. 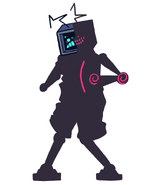 A concept of Hex, in the popular corruption mod.

Whitty impressing Hex with his height.

Artwork of Hex having a snack featuring Whitty. 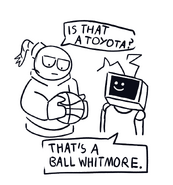 Doodle of Hex teaching Whitty about a ball.

Doodle of dudes being dudes. 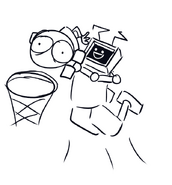 Doodle of a slam dunk!

Artwork of Hex in funky clothes, made by his creator on Twitter.

A sketch of Hex, Whitty, and Carol playing Uno.

Hex and friends in school uniforms.

Art of Hex, Carol and Whitty at Hatsune Miku's concert, made by YingYang48. 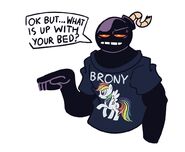 Hex in a suit. (This can be used for yingyang48’s hex live streams 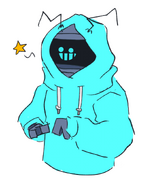 Hex in an oversized hoodie. 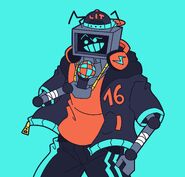 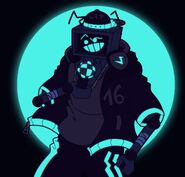 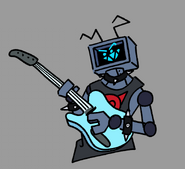 Art of Hex and Sarvente, made by her creator: DokkiDoodlez.

The Virus as Miles Edgeworth.

The canon sexual orientation of Hex, confirmed by the creator of the mod on Discord. 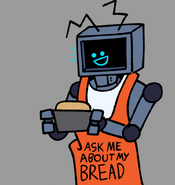 Hex with his baked Banana Bread (his favorite). 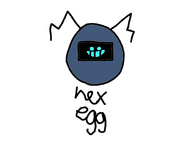 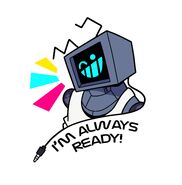 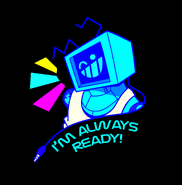 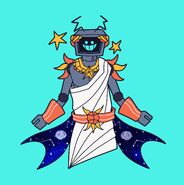 Hex as a God of Sports. 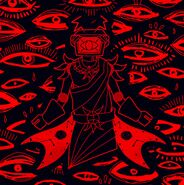 The Virus as a God of Dunks.

Hex upgrading to Windows 11. While this could just be a fun little doodle, it could also mean that the next update to VS. Hex is coming relatively soon. 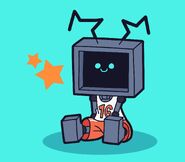 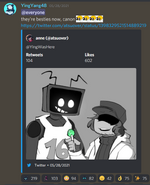