Reason: Let's get to work. We still need animated sprites of everyone and static sprites for Chongyun and Xingqiu.

Alright, just a couple of Hu Tao vs Xingqiu's songs, though. I don't know that many. - Shaggy

Hu Tao vs Xingqiu is a reskin mod created by RedFlaim, which reskins Week 1 of the Base Game.

“Yoh, now why might you be looking for me, hm? Oh, you didn't know? I'm the 77th Director of the Wangsheng Funeral Parlor, Hu Tao. Though by the looks of you... Radiant glow, healthy posture... Yes, you're definitely here for something other than that which falls within my regular line of work, aren't you?”
― Hu Tao, Hello Dialouge

Hu Tao is a playable 5-Star character in Genshin Impact. She replaces Boyfriend in the mod.

Hu Tao has long dark brown hair fading to crimson at the tips. Her hair is styled into two high twintails. Her bangs are side-swept to her left, the layers framing her face curled inwards and the layers behind curled outwards, and two shoulder-length locks of hair. Her eyes are a bright scarlet with white, blossom-shaped pupils. She wears a black porkpie hat emblazoned with a wooden talisman, adorned with a red plum blossom branch in bloom, along with an indigo tassel tied in a looped knot.

Hu Tao wears a traditional red shirt with a mandarin collar, a dark brown coat with sleeve cuffs, and black shorts with gold accents. Her Vision is embedded at the back of her coat, along with long rectangular coattails, and golden brooches attached underneath her coat's collar and waist. She wears a pair of mid-calf-length white socks, red straps with plum blossoms wrapped on them, along with low-heeled black dress shoes. Her fingernails are painted black, and she wears multiple rings. She wears a loose red bracelet on her right hand, though her long sleeves usually hide it. Her outfit is described to be the daily work clothes of the Wangsheng Funeral Parlor's director.

“Xingqiu at your service, my liege! I humbly trust that even one such as I, a mere bookworm, may yet prove to be of some utility under your wise leadership. Nice, I don't often get a chance to speak with such formality. It felt pretty good!”
― Xingqiu, Hello Dialouge

Xingqiu is a playable 4-Star character in Genshin Impact. He replaces Daddy Dearest in the mod.

Want to know more about Xingqiu?

Xingqiu has dark, navy blue hair with golden amber eyes. He wears a blue earring with a gold tassel on his right ear. His vision is pinned to the bottom of the left side of his coat on top of a span of frilled, white fabric. A tassel made of amber which matches his eyes hangs from the vision.

His attire consists of a long coat of silk which gradients from black at the collar, to shades of navy blue as the material descends. The coat's underside is a contrasting yellow with a faint, wavy pattern decorating the fabric, alluding to his Hydro vision. His collar and shoulder plates are rimmed with a gold, metallic material and to the right side of his chest sits a large circular brooch. It's embedded with a blue jewel on the coat buttons and sleeve cuffs. Underneath, Xingqiu wears a white long-sleeved shirt with a frilled seam to the right, revealed by the slit of his coat behind two overlapping ribbon-like buttons.

He additionally wears frilled sleeves which extend from his coat. A clover-like ribbon of white, black and yellow is pinned to the right side of his belt. Beneath this hangs a pair of rectangular ribbons, one in white covering a longer, black ribbon. Those wields gold decals at their ends. He also wears a pair of navy-blue shorts with ends of black. On his right leg, Xingqiu wears a garter with a blue tassel below the knee. His footwear consists of a pair of white high-calf boots, black at the heels and soles with gold motifs.

“My name is Chongyun. My family has practiced the art of exorcism in Liyue for many generations. Fate has been generous in allowing my path to cross with that of your distinguished self. ...Oh, no — my services are free of charge!”
― Chongyun, Hello Dialogue

Chongyun is a playable 4-Star character in Genshin Impact. He replaces Girlfriend in the mod.

Want to know more about Chongyun?

Chongyun wears a symmetrical white hooded jacket with navy embroidery. Under this, he wears a blue shirt over white pants with gold cuffs, along with a dark navy undershirt. He has bandages around his right wrist and right ankle. He wears his Vision on the left side of his belt. His outfit is described to be as a traditional thaumaturge's trappings. 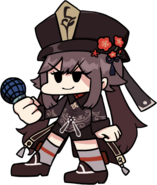 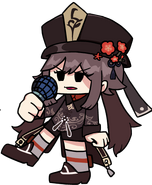