Reason: The mod is a demo. Just like how Huggy's game, Poppy Playtime, is also a demo

Reason: Huggy Wuggy is from Poppy Playtime, a game that contains jumpscares and unsettling imagery

Reason: Huggy Wuggy comes from Poppy Playtime which is owned by Mob Games

Possibly in the second encounter with Huggy

Huggy Wuggy is the face of a toy factory and now an antagonist from a horror game named Poppy Playtime. He is a secondary antagonist, serving as the main antagonist of "A Tight Squeeze", the first chapter of the game. When Boyfriend and Girlfriend get a mysterious letter in the mail, inviting them to a toy company, they decided to take the invite, and there they find the hulking 12 foot tall toy. Will Boyfriend be able to distract him long enough to live?

Huggy Wuggy is shown in the game to be an enormous creature with incredibly long arms and legs, leaving him standing at a towering height of at least 12 feet, like a sock monkey. He has blue fur and many sharp teeth, on top of having another mouth inside of its mouth. He has yellow hands, red lips, and eyes that resemble googly-eyes. He also wears a light blue bowtie. While seemingly a robotic creature, Huggy Wuggy's revelation of his multiple mouths, blood he produces when he falls to his supposed death and saliva in his mouth when he kills the ex-employee heavily hint at him actually having organic body parts. 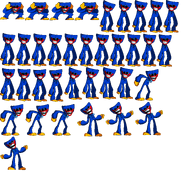 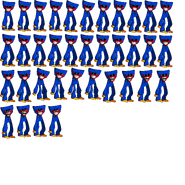 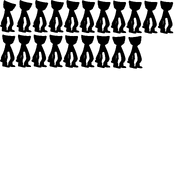 funweek.png (Huggy's Week for the mod)

The background for "Playtime", which is, indeed, the Playtime Co. Factory

Ditto, but the shadows were removed 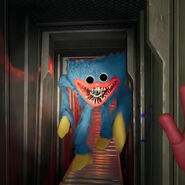 Huggy Wuggy chasing you in the vents in the original game