Joul The Cool (or JTC for short) is a character by FrogTreat, with the mod he appears in being made by both FrogTreat and Maria Wasak. The mod adds three new songs including Funk Off, Ping-Pong, and I'm Blue.

The story of this mod is rather simple: Boyfriend and Girlfriend are strolling through a funky town at dusk. Then, they stumble upon a painfully-cool-looking guy with blue hair and a golden “JTC” chain. He challenges Boyfriend, saying there can only be one blue-haired homie in the hood.

JTC's has apricot skin, brown eyes and blue hair which he styles in a messy, unkept fashion. Notably his hair has a single bang on the right side of his face.

He wears a long sleeved shirt which has different stripe colours on both of the sleeves: his right sleeve has blue and red stripes while his left sleeve has yellow and red stripes. JTC also wears a golden chain with "JTC" on it; this is complemented by the pointy shades he wears to cover his eyes.

JTC wears a belt around his waist to hold up his dark blue baggy jeans, and he also wears a plain white cropped t-shirt that exposes his stomach. Finally, he wears yellow, green and black shoes that have an oddly pointy tip at the end.

Note: All of these Cameos are not canon to the JTC's story. 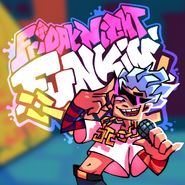 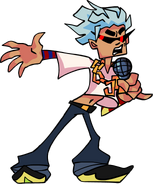 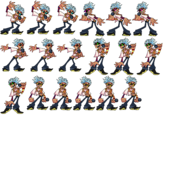