Reason: Some trivia and information about her would be nice. Also, assets, she's missing a lot of assets.

You fat rat, I hate you! Don't try to steal my spotlight ever again! - Original Dave


Kazuki Ongaku, often nicknamed Zuki, is a character from The Weeg Mod. A former pop idol and owner of The Cerulean cafe, she's the main opponent of Week D. Her week includes 3 songs, being I Love You, Sunnyside Up, and Achievable Fantasy. She also appears as the player character for the hidden song Senpairella.

She later appeared in her own mod, Zukireta. She gains an additional song, the titular Zukireta, once again as the playable character.

Kazuki is a humanoid robot with light blue "skin", and long blue hair tied in a ponytail. She black lines on her face, wearing a pair of black glasses and blue earrings, as well as a black long sleeved undershirt, a dark blue sleeveless turtleneck, khakis and black and white, high-top sneakers.

Prior to version 3.0 of The Weeg Mod, Kazuki's design was relatively the same, except for her shirt, which was a solid cerulean turtleneck.

In the final minute of Achievable Fantasy, her outfit changes, revealing her idol uniform. Ditching the glasses, her hair is now down, revealing an ahoge similar to her girlfriend's. Kazuki now sports a gray button-down shirt, a lighter gray undershirt, gray knee-high socks, a blue skirt, and matching knee-high blue boots.

Note: All of these cameos are not canon to Kazuki's story: 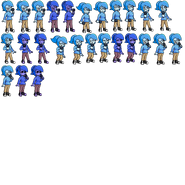