This mod by Sector03 replaces Boyfriend with a youtuber by the name of Kubz Scouts aka Jay. He has dedicated a number of Friday Night Funkin' videos ever since it's release.

Jay wears a pair of red headphones, black sneakers, dark blue pants and a black sweater with red drawings based on his End Your Lifu merch. He has slightly tan skin and brown, razor-cut hair.

In the old version of the mod, Jay wore a black and red shirt instead of a sweater, and his hair was tied in a hair bun that was given the humurous nickname of "Nagito Palmaeda". 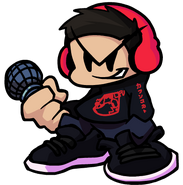 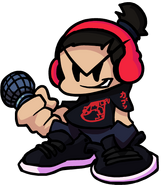