Reason: The screen shakes violently during the Galaxy Collapse part in Little Man 2, and Big Man's poses are so jaunty in-game that they might as well be shaky, considering the absolute note barrage.

Reason: Suggestive due to there being a part in Little Man 1 where Boyfriend repeatedly says the word "dick", the cutscene with the Arabic text in Little Man 2 shows Boyfriend's balls, and the song "Balls In Yo Jaws" is referenced in Little Man 2. This is also saddening because Little Man cried about Ron's death in the cutscene before the song "Little Man 2" as he drank. (He's drunk because of Ron's death) Also, poor Little Man dies of Lead Poisoning at the end of the mod. Even though it is for comedic intent, it could be saddening for some. Finally, this is unsettling due to Little Man 2 having a FNaF Jumpscare, and a cameo of a character from the Walten Files series with an eerie sound effect. Tricky makes an appearance here, Y'all know the drill That's Madness Combat, which is known for its EXTREME amounts of over-the-top gore and violence.. When Tricky turns into MC4 there is blood and Tricky's Madness appearance could be unsettling. Not to mention, Little Man's source mod is Bob's Onslaught, and Bob is... Bob.

Reason: Little man 2 was out like 5 or 6 damn months ago, and yet we still need sprites poses animated sprites and many more.

Reason: Little man is associated with another already popular mod called Bob's Onslaught, landing it on the golden throne way before the second song came out!

Reason: When this page is done, I assure you, a LOT of content is gonna be here on the page(Already 38,219 bytes!)

Reason: Most of the memes could be copyrighted, an example is Never Gonna Give You Up, which was used in Little Man 2

Deceased (Boyfriend steps on him at the end of the mod and again from lead poisoning at the end of big man. However he seems to be resurrected in Vs. Baby Blue Brother.)

Due to his small size, he must not weigh a lot.

(as Big Man) Due to his large size, he must weigh a lot.

VS Bob (literally every mod ever vs)/Bob Onslaught

Little Man is a small dude appearing in the Bob's Onslaught mod and the Little Man 2 mod.

In Bob's Onslaught, he has an 11 minute song with many memes. Along with that, in Little Man 2, he also has a baffling 20:28 song filled with even more memes, and a short-lived final song.

In the ending of Little Man 2, it is stated that he dies from lead poisoning some time after the mod takes place.

He is a pro Clash of Clans gamer and fluent at Glass Breaking language.

Little Man is a small, white, simplistic man with a long unibrow and holding a small grey microphone. He is somewhat crudely drawn. When in his Big Man form, he becomes the size of a large building, incredibly muscular, and radiates anger and rage. He is also well drawn in this form.

In his Caleb Glass (Pizza here) transformation, he has brown skin and a bald fade black hair. He wears glasses, a white shirt covered in a black hoodie, blue jeans and black and white Nike sneakers.

In his Tankman transformation, his helmet, uniform, gloves, pants and boots are black, while his skin, goggles and vest are white. On both of his arms are white corporal insignias, which distinguish him from the rest of the Tankmen soldiers.

In his Table transformation, the description of the table is crudely drawn. He is a brown table, blue glass and four bricks at the surface.

In his Ok I Pull Up Capybara transformation, he is a capybara with brown fur, ears, dark webbed feet, dark paws and dark snout.

In his Caleb Glass (Folded like an omelette) transformation, he is similar to his second form as both of them are the same person. He wears a red hoodie, dark grey pants and black and white Nike sneakers.

In his Bloxiam transformation, he has a yellow skin, wears a sunglasses, purple bandana, black tie, a red and white polka dot suit and top hat that is similar to Take a Chance.

In his "Crewmate" transformation, he is a crudely drawn Among Us astronaut with red suit and a blue visor.

In his Arcade Craniacs/Edward BF transformation, he is a fusion of Edward Centeno and Boyfriend. He has tan skin, blue hair, white shirt with a red prohibition sign, blue jeans, and red and white sneakers.

In his Garcello transformation, he has a teal hair with a brown hat covering up his eyes. He wears a grey/black hoodie with a plain white t-shirt underneath. He has teal pants, brown boots and white fingerless gloves.

In his Tiky transformation, he looks like a tiny version of Tricky the Clown. He is a green-skinned zombie with curled, red-orange clown hair. He wears a iron slab hockey mask, gray cloak and a dull blue ruff and a matching pair of dull blue shoes.

In his Madness Combat transformation, it is unknown which one of Nevadeans is him. There are group of Nevadeans seen dead on the ground, Hank stabbing a baton to a l33t agent.

In his Tricky the Clown transformation, he has green skin with curled, red-orange clown hair. He wears a gray cloak and a dull blue ruff with light blue orbs and a matching pair of dull blue shoes.

Reason: Loud Sounds: Little Man includes, but is not limited to: loud fards, glass shattering, table shattering, very high pitched vocals, or bass boosted bruhs. Little Man's voice might also be ear-grating, due to the high pitch. Tricky voice is loud. and big man is VERY loud. The Little Man 2 Menu music is also just a mess of auditory stimuli more than it is a song.

Vulgarity: Around 1:17 of Little Man 1, a sex joke about the clitoris is made. Also. Around 5:34. Little Man spams a bunch of curse words, and the Nerf this audio that is used in Little Man 2 is from a video of a person in a D. Va cosplay doing a pretty sexual dance. Along with that, Little Man 2 mentions a boner.

Note: Little man's icon is not available, the icon is fanmade used from Big Man.

This mod has songs that haven't started or are unfinished.

Note: Boyfriend just blows up in the middle of his first turn during Big man. And this fate won't change regardless on how many notes you hit during this period. Basically, Big man's file is correct.

After the Spotify ad after Previously mentioned part, the Old/Bobslaught ver. ends

The references are almost entirely the same as the Bob's Onslaught version of Little Man, but with the following differences 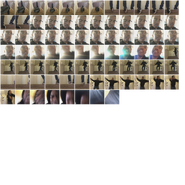 Ad in the end of Little Man's song until the new part of little man starts.

Little man putting his phone away after he's finished gaming. 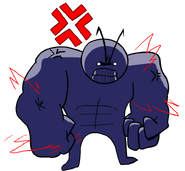 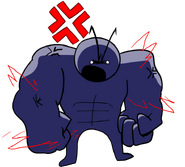 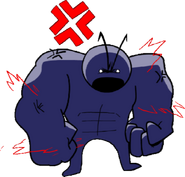 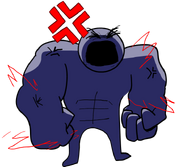 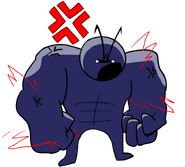 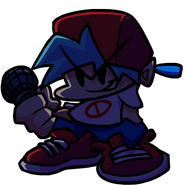 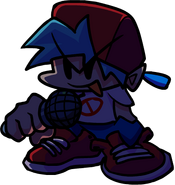 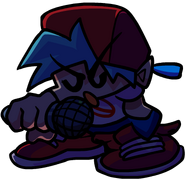 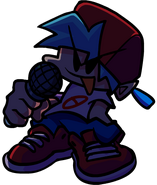 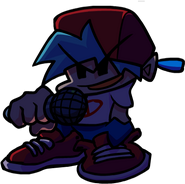 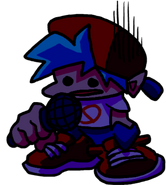 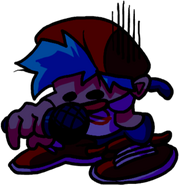 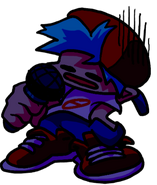 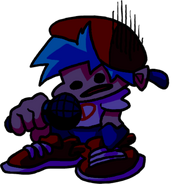 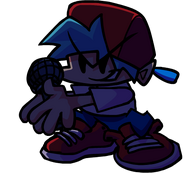 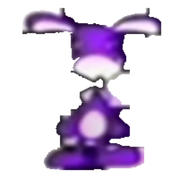 Banny from the Walten files. Temporarily replaces Little Man around 19:52-19:54

Note: Little Man Doesn't Have A Cutscene Or Any Dialogue

(Little Man then goes to his darkened house and kicks the door open, damaging it, after failing to reach his doorknob)

(Little Man is then seen again on a couch with a blue shirt, having downed several bottles of beer, and momentarily looking at a cracked photo frame of Ron, wiping a tear from his eye. He looks very angry)

(Suddenly, Boyfriend breaks in through the window. Little man turns around in shock)

(The Screen Is Boppin' While Some Sound Plays In The Background. Meanwhile Little Man becomes the size of a normal person while stomping, before he angrily starts growing to an immense size and destroys his entire house. Boyfriend flies away and proceeds to turn into a gif dancing in the church of mid fight masses with a caption that says "Go BF" and the agachate y conocelo beatbox in the background)

After that, Little Man then dies from lead poisoning (A Scribble On Top Of The After That Text)

(Picture of Little Man dead with some things in the background)

(Note: This is the only way to play Little Man 2. Downloading the one above will only allow you to play the original Little Man)