Funkipedia Mods Wiki
Register
Don't have an account?
Sign In
Advertisement
in: Characters, Full Week, Had References In Other Mods,
and 10 more

“Woah! You have a great voice!”
― Liz, Forbidden Love

Liz is the main "protagonist" of the Liz Week mod. Her week includes 3 songs, called Classroom, Forbidden Love, and Battle.

Liz wears a blue long-sleeve V-neck shirt with black sleeves, She also wears a pink skirt and blue-gray rainboots with white bottoms. She has very stylish pink hair. She holds a clock, and she also has a yellow and pink backpack.

Note: All of these cameos are not canon to the story of the Liz Week mod or the character herself.

Girlfriend: Where are we?

016: My apologies, I just brought Liz back from another dimension.

016: Instead of closing the portal I opened another one, and I accidentally brought u guys here.

Liz: Woah! You have a great voice!

Liz: Can we sing another song?

016: Ya see, in this world, which is mine btw, a lot of events and locations have actual music playing in the background

016: Also, this is the last song, I'll take u guys back to ur universe...or dimension, idk both words mean da same to me. 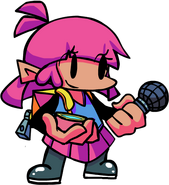 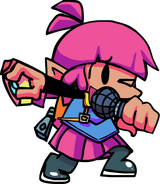 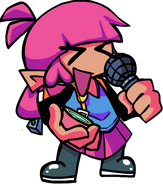 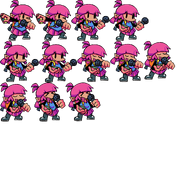 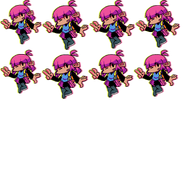 The background for Liz's week