Lolbit appears as an antagonist in Five Nights at Freddy's: Sister Location. It has a rare chance to appear in the main game, and as an enemy in the game's Custom Night. It appears in a mod by ByThePowerOfDUSKULL and replaces Monster in Week 2.

It appears as a recolor of Funtime Foxy. It consists of orange and purple instead of pink. It's eyes are black and white instead of white and yellow. It also has a button that resembles a TV test pattern. It is seen coming out of a TV that is seen on wheels with seemingly a DVD player in the middle of it. The TV itself is filled with static and screen tearing, displaying a test card with Lolbit's head flashing briefly during it's idle animation. 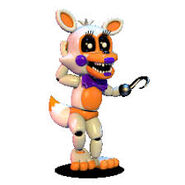