Sonic The Hedgehog is the Main Protagonist from the Popular Video game franchise, Sonic the Hedgehog. MCSonic is a mod made by FreshWoomy and based off of MCSonic from Sonic CD. It originally went over Pico. There is an upcoming remake, putting MCSonic over Boyfriend with Week 5, and 6.

Sonic the Hedgehog is a Blue Anthropomorphic Hedgehog with White Gloves, Red Shoes with a White strap and Big white socks. He has Long lanky Arms and Legs with Huge hands, feet, and Head. Sonic's Eyes are Styled to have 1 Large eye with 2 Black Pupils. Sonic is Wearing a Necklace with a Ring on it in the mod. 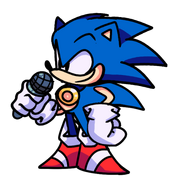 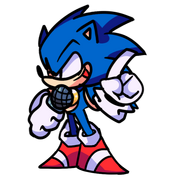 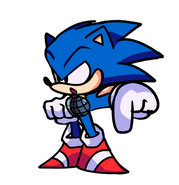 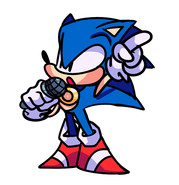 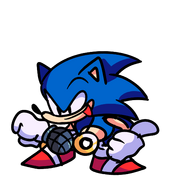