Come on! It's gonna be a big night! - Sarvente

Upcoming: Macy is getting a THIRD redesign, that is coming with The Weeg Mod V4.

Mackenzie Isabelle Cortez (or Macy for short), is a character from The Weeg Mod, an aspiring musician, and the main opponent of Week A. Her week includes 3 songs, named Coffee Date, Electromace, and Gigavolt.

CANON TO BOTH FNF MACY AND MAIN (COMIC TITLE) MACY

Mackenzie Isabelle Cortez, aka everyone’s favorite Macy, was born on February 14, as one of two twins, the other being her sister Maya, and overall the youngest of her three siblings. Her main inspirations in her life are her mother, Daphne Cortez, who was a famous rock star before her birth, and Kazuki Ongaku, a young, retired J-Pop idol she’s always been a fan of.

Personality wise, Macy has always been the competitive type. This drive of hers allows her to compete in a variety of sports with decent results, especially tennis. And she’s never been one to accept losing, either, as Macy is a VERY sore loser, quick to blow a casket and say things she doesn’t really mean. However, putting all this energy into trying to be the best quickly tires Macy out, leading her to constantly be drinking coffee, which has become her favorite drink.

This addiction to caffeine is also what led to Macy meeting her crush in person. After retirement, Kazuki started up a cafe, the Cerulean (which’ll be the main setting of future comic woooOOOOOO-), in midtown Manhattan. This small opening caught the attention of Ms. Cortez, who went in to check to see what the place was about. As soon as she saw the blue haired robot girl, Macy INSTANTLY recognized who she was, and tried striking up a conversation with her.

Now in a romantic relationship, Macy and Kazuki are now both co-owners of the Cerulean. Her talents as a musician are also recognized somewhat, albeit with a much smaller crowd. One day, Macy’s mother Daphne invites her to a karaoke session, eager to see her daughter’s improvement and introduce her to a long time friend of hers. Eager to make her mom proud, Macy rushes off to the karaoke bar, mic in hand, but not without being dropped off at Grand Central by her girlfriend. However, while locating which terminal she has to go to, she’s interrupted by a passerby, who only makes one sound.

To her left, a blue haired teen and his girlfriend, who happened to be sitting on a set of speakers which just so happened to be in the center of the terminal, were looking at her, and the mic in her hand. Her competitive spirit riling up, Macy was ready for anything the blue haired kid threw at her.

Ok so that happened. Macy accepts defeat from BF and continues on her way to her terminal, ready to meet up with her mom. Meanwhile, Kazuki, in the crowd watching as she hasn’t left the station yet, is moved by just how much her girlfriend put into her performance. She makes quick haste to her cafe, expecting two customers within the hour…

Right when this series (will) start, Macy would have known Zuki for about a year. While working towards a steady wage and a steady relationship, she meets old friends, new friends, and even a short alien girl. Of course, since this is all a work in progress comic idea, this isn’t as developed as the Funkin’ mod, which has its own story and everything fully realized, essentially.

(All of this lore comes from this.)

Note: All of these cameos are not canon to Macy's story. 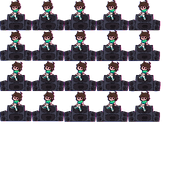 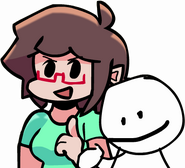 Minus Macy made by ItIsIWeeg himself.