Funkipedia Mods Wiki
Register
Don't have an account?
Sign In
Advertisement
in: Pages with copyrighted assets, Characters, Boyfriend,
and 8 more

Alright, just a couple of Mario's songs, though. I don't know that many. - Shaggy

Reason: The Super Mario franchise is owned by Nintendo.

Were you looking for a different Mario?

Blue (Stylized as black in FNF)

Mario is a famous video game character, created by Nintendo. While normally your average plumber, things go out of hand when Princess Peach goes missing. Here, however, he only has to worry about rap battling his way to presumed victory. Essentially a jack-of-all-trades kind of plumber, he wouldn't hesitate to try.

Mario wears a bright red shirt and blue overalls with yellow buttons. He also has a hat with the letter M on it, which stands for Mario. He has big white gloves and brown boots with tan bottoms. Usually, Mario's eyes are depicted as bright blue.

Mario as he appears on the menu. 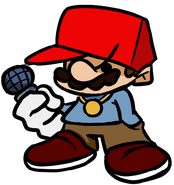 Mario as he appears on the menu.

Ditto but in yellow.

Ditto but in magneta.

Ditto but in blue.