Reason: May contain spoilers for Undertale

“I'M NOT GOING TO DESTROY YOU WITHOUT A LIVE TELEVISION AUDIENCE!!”
― Mettaton, upon losing all your fuel in the Cooking With A Killer Robot segment, Undertale


Mettaton is a character made by Toby Fox and modded in by JHaix. Initially poised as an entertainment robot turned human killing robot, this robot with a soul found Boyfriend and brought him on as a contestant on his new show.

Mettaton originally appears as a gray, largely rectangular box with a 4x5 grid of rectangular lights at the top. The grid of lights can change colors between red, yellow, green, and blue, and Mettaton uses these color changes in place of facial expressions. He has four dials along the bottom of his body, and the bottom, he has a single leg which ends in a wheel. He has two segmented robotic arms which end in white gloves. 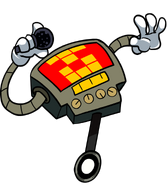 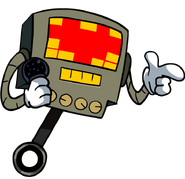