Reason: In Zavodila Ruv makes the whole screen shake every time he hits a note.

Note: The mod has been privated on GameBanana and does not seem to have any intentions of returning.

Looks like your fun was limited! - Fleetway Super Sonic

Wow... So that's how that turned out! This whole passage is just... extraordinary! - Xingqiu

Reason: This was the third most viewed mod on GameBanana before it was privated.

Were you looking for the genderbend version? Or the Minus version?

Mid-Fight Masses, also called by its full name Sarvente's Mid-Fight Masses, was a Friday Night Funkin' mod that adds in two weeks with 5 songs in total, cutscenes, and various other features, such as a remix of the Tutorial. In this mod, Boyfriend and Girlfriend are trying to look for a bathroom, but manage to stumble into a church. In the church, they end up rap battling the "nun", Sarvente.

Girlfriend: But how about we take it up a notch? I hope you will still keep up~

Sarvente: Come on! It's gonna be a big night!

Sarvente: This time I really want you coming, I know our differences are a huge gap but...

Sarvente: I really want to spend time with you today!

Sarvente: So you should really get here!

Sarvente: EXCUSE ME, DON'T BE SALTY

Sarvente: ...That was very unholy of you.

Sarvente: *sigh*You know what? Just get here, okay? I'll see you soon, I have some guests over.

(Sarvente hangs up her phone)

Sarvente: Greetings! Sorry for the inconvenience, are you interested in joining?

Girlfriend: Me and my boyfriend were just looking for the bathroom.

Sarvente: Awh but it seems like you two seem really good for this place. I'm sure of it!

Sarvente: Huh? ...I didn't quite understand what you said but let me show you why it's really good to join!

Sarvente: It's always kids like you who assume you can enter this sacred place freely, just to make fun of it.

Sarvente: This time, I'll give you another chance to take my offer. I'd really love for you to join us.

Sarvente: You finally came by...

Sarvente: I'm sorry for the trouble, Ruv... But looks like you have to see me like this...

Ruv: It's my job to handle this kind of stuff too anyway...

Ruv: You've pushed quite a lot of buttons while I was away, huh?

Ruv: Well you really should've just ran away or just joined the church while you could.

Ruv: But you decided to pull a struggle. So here we are.

Ruv: Name's Ruv by the way. But that is the last name you will probably be hearing after this.

Ruv: I would be too tired to do these kind of stuff, but...

Ruv: I'd say break a leg but I might end up breaking yours literally, and I'm going to make this as painful as possible for you...

Ruv: ...and your little girlfriend.

Sarvente: It's fine. It is really.

Sarvente: I'm quite tired of this cat and mouse chase y'know?

Sarvente: So I want to let out a little secret of mine. Let's keep this between the four of us okay?

Sarvente: May God forgive you...

Selever: I Felt like I needed to say that before ya start whining over the smallest shit

Selever: LOL yes, I see YOU

Selever: LOL yeah, that's Fine. Expect me to talk a lot but y'know I don't care if it annoys you a lot.

Selever: So, let's have some Fun!

Selever: Tampering with my own parallel world...

Selever: Lol, look dude, I don't know how the Fuck you got here...

Selever: But the Demon and Criminal you're searching For are probably making out right now

Selever: The Name's Selever by the way!

Selever: No need to introduce yourself, <username>. I've looked through your files to Figure out your name.

Selever: I'm kinda pissed you entered my parallel world, I made this temporarily so my sister can at least feel the warmth of our parents...

Selever: ...Even in this parallel universe I made, it's not the real them.

Selever: So, while my power can keep this place together...

Selever: ...I'll end y'all along with this place!!

Selever: AHAHAHAHAHA YOU DUMB FUCK. DID YOU REALLY EXPECTED A REWARDING ENDING???

Selever: It's as iF you Forgot what I said the First time you entered my game LOL!

Selever: Anyway! Thanks for letting me waste your time! Have fun collapsing with this Universe!

Selever: Quite sad to see you die like this but I couldn't care less.

Rasazy: Maybe next time... I will be allowed to meet real Mama and Papa...

At its release on March 20, 2021, the mod received criticism due to its poor charting and Sarvente's idle animations. After the update, the charting of the mod is still receiving some criticism, especially when the input system does not react to the double notes. Double and triple notes will be fixed sometime in the future. There have also been slight improvements to Sarvente's idle pose animations. Dokki.doodlez claimed that she and her developers were rushed when recharting the mod which is why the inputs for the double and triple arrows are buggy. She recommends that the players must wait until the charting is fixed.

On April 30, 2021, 8:13am PST, Dokki.doodlez released an update to the mod that added Selever, a non canon child of Sarvente and Ruv, and one new song, Casanova. The update was first released as a Mediafire file due to GameBanana's sluggish decisions with updating and accepting mods along with their updates. After a few days with enough people playing the mod, the game has received more criticism than its initial release due to people misunderstanding the concept of the update's intentional bad charting as a late April Fool's Joke.

Sarvente as she appears on the main menu of the mod.

The cross and sickle that appear on the story mode menu.

The cross arrows assets during Gospel 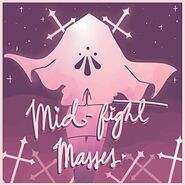 A small icon for the mod.

Another icon for the mod.

A poster parodying the horror movie "The Nun" found in the game files.

A dumb Selever meme made by the devs, hidden in the files.

Logo of the mod

A banner of Mid-Fight Masses developers. The person in the middle is Dokkie.doodlez, the one on the left is Mike Geno, and the one on the right is kuroao_anomal. 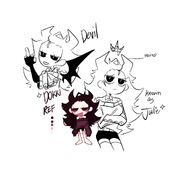 Art of a smug-looking Sarvente in Shama AU. (The text translates to "I want to talk") 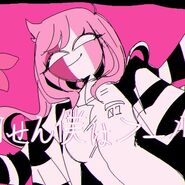 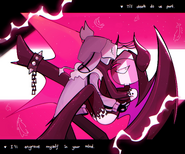 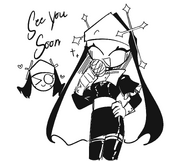 A comic of Sarvente and Ruv talking about their past.

Different versions of Sarvente and Ruv in alternative universes and their relationship with one another. 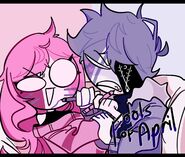 A brief description of Male Dokkiedoodlez and Selever. These two characters were made for April Fools.

April's Fuckboys. The person on the right is male Dokkiedoodlez while the one on the left is Selever. Dokkie just wanted to mess around with her pen settings. Link 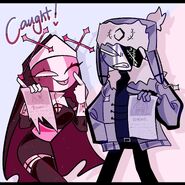 Sarvente and Ruv drawing how they see each other as posters. (1/2) 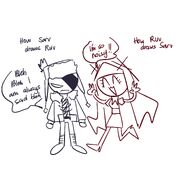 Sarvente and Ruv drawing how they see each other as posters. (2/2) 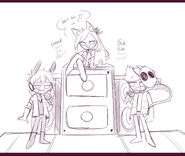 Doodles of the MFM characters.

A drawing of Alternative Universe of high school Sarvente and Ruv kissing based on a television series, The Girl From Nowhere, episode 8.

Artwork by Dokki on the two being separated.

Portraits used for Rasazy at the end of Selever's Week. 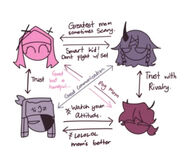 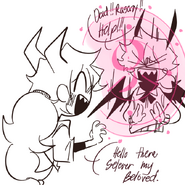 Selever being harassed, hidden in the files. 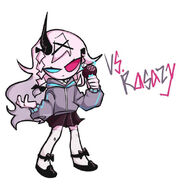 Dokkiedoodlez's last tweets before deactivating her account. Screenshot taken on May 19, 2021, 9:37:36 PM EST